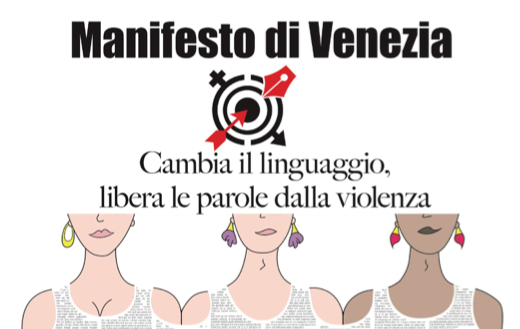 The “Manifesto of Venice”, a manifesto for gender equality and correct information, will be launched on the World Day for the Elimination of Violence against Women and Girls, on 25 November 2017.

Signed by 800 journalists, including directors of national newspapers in Italy, the manifesto will be launched by the EFJ affiliate in Italy, the Federazione Nazionale Stampa Italiana (FNSI) Equal Opportunities Committee (CPO). It is a result of their collaboration with the CPO of Unione Sindacale Giornalisti Rai and Giornaliste Unite Libere Autonome (GiULiA), following a proposal by the Veneto Journalists’ Union.

“We, journalist signatories of the Manifesto of Venice, are committed to information that is careful, correct and aware about the phenomenon of gender violence and its cultural, social and legal implications. The description of reality in its entirety, beyond stereotypes and prejudices, is the first step towards a deep cultural change in society and the achievement of real equality,” the document states.

The manifesto is also a commitment to the Istanbul Convention of 2011, which condemns “every form of violence against women” and recognises that achieving equality is a key element in preventing violence.

“A common commitment must be to eliminate all cultural root causes of disparities, stereotypes and prejudices that directly and indirectly produce gender asymmetry in the enjoyment of real rights,” the manifesto states.

A campaign to raise awareness and signatures is now being launched, which the CPO at FNSI invites everybody to join by emailing cpofnsi@gmail.com.

The manifesto comes almost 10 years after the International Federation of Journalists’ (IFJ) recommendation on 25 November 2008, which the FNSI member of the IFJ Gender Council collaborated on, about how to report violence against women in the media. This year, the IFJ is also campaigning to stop violence against women journalists.

The full Manifesto of Venice is available here