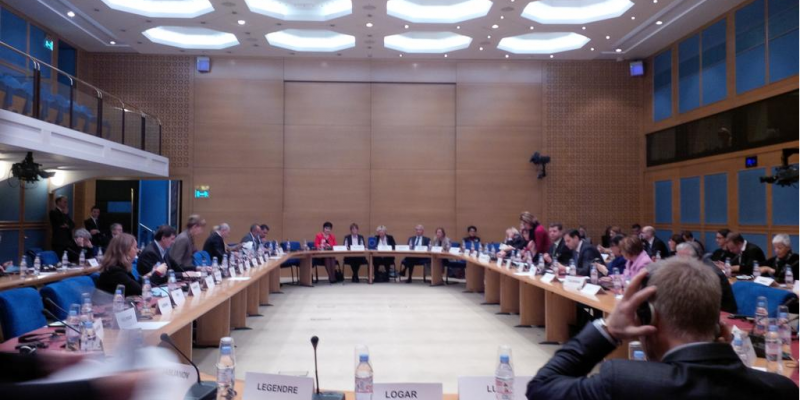 
The European Federation of Journalists’ (EFJ) President, Mogens Blicher Bjerregård, and the International Federation of Journalists’ (IFJ) President, Jim Boumelha, signed today a “memorandum of understanding” on the creation of an online safety platform for journalists with the Council of Europe and three other media freedom partner agencies. The event took place during a conference jointly organized by the Parliamentary Assembly of the Council of Europe (PACE) and the French Senate at the Palais du Luxembourg, in Paris.

Reporters Without Borders (RWB), Article 19 and the Association of European Journalists (AEJ) also signed the memorandum. The conference has involved many politicians, academics and editors from different media such as Le Monde, the BBC and The Economist, among others, who discussed the risks and threats that journalists have to face nowadays.

“I am extremely concerned that certain Member States of our Organisation are incapable of complying with their obligations to safeguard freedom of expression and respect journalists’ physical integrity” said Anne Brasseur, President of PACE. “Journalists are not just watchdogs but also co-creators of the public space”, said Gvozden Flego, Media Freedom rapporteur for PACE.

“This platform is the first step to create a tool to react more swiftly and take action to enhance the safety of journalists”, said the General Secretary of the Council of Europe, Thorbjorn Jagland. “Securing the safety of journalists and other media actors is a necessary condition for ensuring media freedom and for a healthy, functioning democracy”.

“This new platform is a bridge between journalists and politicians – we know each other well, and must be able to act together”, said Mogens Blicher Bjerregård.

The tool, which will be launched today, will allow trusted media freedom partner agencies to post “alerts” on a public, centralized online platform when individual journalists are in danger or their work is under threat – opening the way for swift reactions from international organisations which uphold media freedom standards, such as the Council of Europe, the OSCE Media Freedom Representative, the EU and the UN.

Alerts would include factual information – vetted by the partners – on physical threats to journalists, bloggers or writers, as well as their sources, invasions of privacy or judicial intimidation of journalists through abusive use of laws on defamation, national security, or extremism. The platform will also show action taken by the Council of Europe in response, as well as regular reports and the comments of the member States concerned.

Read the memorandum of understanding HERE