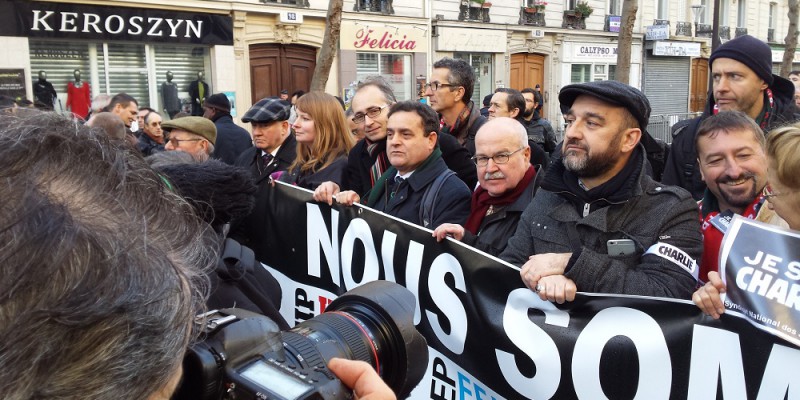 
There were more than a million of supporters last Sunday on the streets of Paris.

Citizens of all backgrounds and beliefs came together to defend freedom of expression, following the terrorist attack that killed 17 people in France and  destroyed the whole team of the satirical weekly “Charlie Hebdo” on Wednesday 7 January.

Marching in front of us were the 17 victims’ relatives and the survivor of Charlie Hebdo. .
Among the supporters, there were heads of governments around the world and some of whom are considered as enemies of media freedom in their countries. They include Turkish Prime Minister Ahmet Davutoglu, Hungarian Prime Minister Viktor Orban, leader of the Spanish Government Mariano Rajoy, Russian Foreign Minister Sergei Lavrov, Israeli Prime Minister Netanyahu and many more who marched alongside French President Francoise Hollande, German Chancellor Angela Merkel, and President of the European Commission Jean-Claude Juncker.

These decision-makers cannot remain insensitive to this citizen call. We could see many watering eyes who could not utter a word to describe their sadness. But we could hear Charlie Hebdo’s ink flowing through a diverse and worthy crowd. This civic unity to say no to fear and hatred deserves an urgent political response…

There is still a lot to do to defend press freedom in the European continent. The soothing words of the French former Minister of Justice Robert Badinter are not enough. The EFJ expects European policy-makers to resist the temptation to introduce anti-terror or Patriot Act. Recent history shows that press freedom is often sacrificed in the name of national security and anti-terrorism.

The only political response which is worthy of Sunday’s citizen march is to consolidate our freedoms and democracy. The EFJ,on behalf of the 300,000 journalists, will ensure that they act on that.