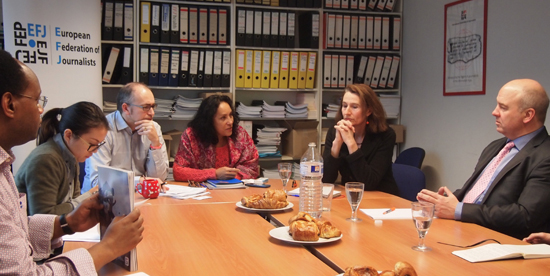 The EFJ presented an exclusive survey on the legal restrictions facing journalists and media. The discussion showed that journalists are most concerned by laws on data retention, protections of sources, anti-terrorism laws, privacy and defamation. The EFJ and its affiliates expressed concerns that such trend of legal restrictions is growing in the climate of fear following recent terrorist attacks in Paris and Copenhagen.

The meeting also highlighted the growing censorship and measures used by governments to silence journalists in countries that have a poor record of media freedom such as Azerbaijan, Belarus, Macedonia, Russia, Turkey and Ukraine.

“I share your concerns and I am following very closely what is happening to the media in Europe,”said Commissioner Muižnieks. “I will continue to intervene within my mandate as Commissioner for Human Rights when there are threats to or violation of media freedom”