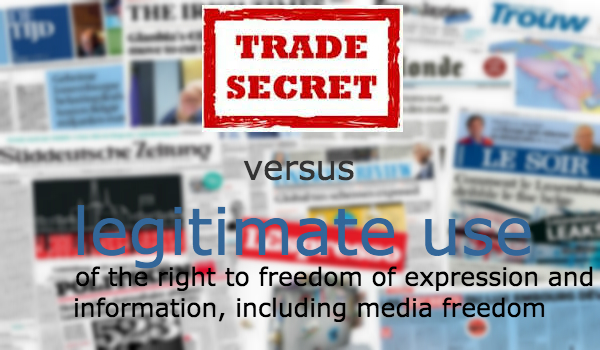 The European Parliament’s Legal Affairs Committee (JURI) today introduced provisions to counter potential restrictions on journalists’ capacity to report on and investigate business activities that are in the public interest. The text voted today rightly specifies that the Directive shall not affect the freedom and pluralism of the media as enshrined in the EU Charter of Fundamental Rights. It further recalls that “Member States shall respect freedom of the press and the media (…) in order to ensure that the Directive does not restrict journalistic works, in particular with regard to investigation, protection of sources, and the right of the public to be informed”.

However, the voted text still includes ambiguous wordings, which require journalists, while already bound by professional ethics, to make “legitimate use” of the information they have acquired. This could lead to prior self-censorship if journalists are uncertain whether their capacity to investigate can be questioned on the basis of this Directive. This, combined with a very broad definition of “trade secrets”, creates legal uncertainty for investigative reporting which will have a chilling effect on the media. European organisations representing the media sector insist that such questions can only be evaluated by a judge, following a disclosure.

Furthermore, it is also important to ensure that Member States can expand the scope of the media freedom exception in accordance with their national and constitutional rules. In this respect, the text voted by the Parliament sorely lacks clarity.

The European Parliament will now directly engage in trialogue negotiations with the EU Council and the Commission to agree on the final text. The EBU, EFJ, EMMA and ENPA call on the EU institutions to build on today’s improvements but reiterate that stronger and clearer safeguards are needed in order to make sure that this Directive does not hamper media freedom.