Safety and solidarity for journalists in Ukraine 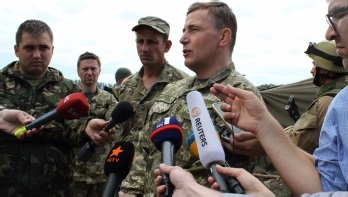 The handbook details the range and scope of restrictions on journalists’ rights experienced by both Ukrainian and Russian journalists during 2014 including freedom of movement, detentions, threats, assaults and deaths. It has interviews of journalists on the front line including a Russian war correspondent, a Donbass editor who was forced to leave his job and a Ukrainian journalist held captive in Donetsk for three weeks. It provides advice from journalists who went through the safety training programmes held by the IFJ, IMTUU and NUJU and discusses the psychological problems journalists suffer from with a Ukrainian trauma counsellor. It starts with a detailed account of reporting the Maidan protests and concludes with journalists’ experiences of conflict in Yugoslavia and Northern Ireland and a reflection on how propaganda impacts war reporters.

The handbook is a result of the cross border solidarity between IFJ/EFJ Ukraine and Russian colleagues who, with the support of Dunja Mijatovic, OSCE Representative on Freedom of the Media, met six times since April 2014. It is being launched today at the OSCE conference on Journalists’ Safety, Media Freedom and Pluralism in Times of Conflict’ being held in Vienna.

The introduction includes the following statement on behalf of the RUJ, IMTUU and NUJU. “Journalists are not soldiers; journalists should not be used as instruments in information wars. We are glad to develop our dialogue between Russian and Ukrainian professional organisations, the IFJ /EFJ under OSCE umbrella, believing that it is a very important part of our struggle for journalism as a public good at home and across Europe as a whole. We face resistance, insults and blame from those who would like to divide us and to use us as soldiers of information wars. But we go on, insisting on our professional and ethical standards, refusing journalists as combatants. We believe that the most important during all conflicts and political contradictions is to be honest, to maintain our dignity and professional duty, to be journalists and human beings first of all. It gives us hope, and the prospect of a future — without violence, hate and impunity.”

“This report is a demonstration that persistent commitment to the principles of our profession and the resolution of differences can help journalists overcome the fog and hysteria of war to find common cause,” said Jim Boumelha, IFJ President. “We hope it will serve as a model for journalists and unions facing conflicts in future.”

“We are very proud of the commitment of our Ukrainian and Russian affiliates to make this co-operation work,” said Mogens Blicher Bjerregård, EFJ President. “They have shown great leadership and courage to unite the profession in the most testing of conditions. Now it is very important not to lose this commitment, but to sustain and hopefully enlarge it.”