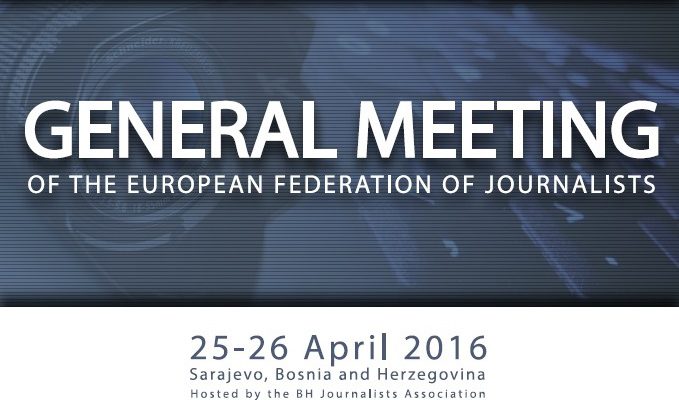 Omar Nazzal, member of the General Secretariat of the Palestinian Journalists’ Syndicate (PJS) in the West Bank, was arrested by Israeli forces on the al-Karameh crossing between Palestine and Jordan on Saturday, 23 April. He was taken to the Etzion interrogation center.

The president of PJS, Nasser Abu Baker, who is also participating in the EFJ meeting, also condemned Nazzal’s arrest.

A delegation of Palestinian journalists (Nasser Abu Baker, Omar Bashir and Omar Nazzal) and a delegation of Israeli journalists (Shaike Komornik and Liat Collins) were invited by EFJ members to participate to the EFJ General Meeting taking place in Sarajevo on 25-26 April.

“The EFJ strongly call on Israeli authorities to release immediately Omar Nazzal,” said the EFJ President, Mogens Blicher Bjerregård. “We also express our solidarity to Palestinian journalists who will gather in Ramallah on Sunday at the International Committee of the Red Cross to demand the release of Omar Nazzal.”

IFJ president Jim Boumelha will be writing to Israel Prime Minister, Benjamin Netanyahu to demand that Nazzal is released forthwith and allowed to travel to Sarajevo to attend this general meeting.

“It was shocking to hear that a participant to a congress for journalists from all over Europe has been arrested by the Israeli authorities on his way to attend and banged in Etzion prison without any reason being given,” said Boumelha. “The 100 delegates representing over 320,000 journalists in 51 unions from all over Europe will be demanding that their colleague is released forthwith.”

Borka Rudić, General Secretary of the Bosnia and Herzegovina Journalists’ Association (BHJA), hosting organisation of the EFJ General Meeting, said that BHJA will contact the embassy of Palestine in Sarajevo in order to help Omar Nazzal to be released by Israeli authorities without any delay.