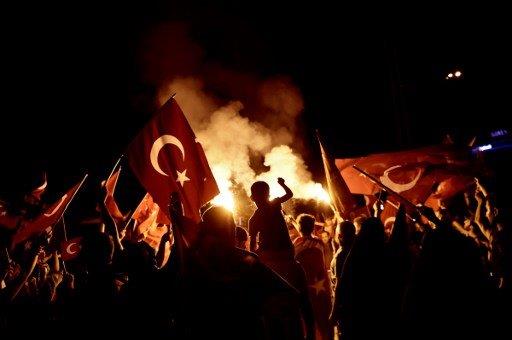 
Attacks targeting the media in Turkey have led the International and European Federations of Journalists (IFJ/EFJ) to alert the Council of Europe about a series of new press freedom violations.

Mustafa Cambaz, a photojournalist for the Turkish Daily Yeni Safak was killed during the attempted coup in Turkey on 15 July.

In the early hours of Saturday 16 July, Turkish soldiers who attempted to overthrow the government seized control of several newsrooms, including the Ankara studios of the state broadcaster Turkish Radio and Television (TRT). They also forced news anchor Tijen Karaş to read a televised statement at gunpoint. Tijen Karaş said the members of the newsroom were held hostage for hours and were threatened.

Soldiers also took over Istanbul offices of Doğan Media Center, which houses several media outlets, including Hurriyet daily newspaper, the English-language Hurriyet Daily News, and the private television stations CNN Türk and Kanal D, holding several journalists and other staff in the building hostage for part of the night. TRT was able to resume broadcasting at about 01:00 BST but CNN Turk remained off air until around 03.30 BST, when soldiers at its studios were arrested. Several journalists were attacked during the clashes.

In Istanbul, Selçuk Şamiloğlu, a photojournalist for Hurriyet and the Associated Press was attacked and assaulted by civilians protesting against the coup.

The federations also report that in the last 72 hours, the Information Technologies and Communications Authority (BTK, the State regulator) has shut down 20 independent online news portals, including Haberdar, Meydan, Medyascope, Gazeteport, Rotahaber, ABC and Karşı. Visitors to these online news sites are faced with the following message: “After technical analysis and legal consideration based on the law Nr. 5651, administration measure has been taken for this website according to decision Nr. Xxxx dated 17/07/2016 of the Presidency of Telecommunication and Communication.” The shutdown has been strongly criticized by the Journalists Union of Turkey (TGS), an IFJ/EFJ affiliate.

According to media reports , on 18 July Azerbaijan, an ally of Turkey, shut down private television channel ANS TV over plans to broadcast an interview with Islamic preacher Fethullah Gülen, accused by the Turkish government of being behind the failed coup.

On 17 July President Erdogan announced that he was ready to reinstate the death penalty.

IFJ president Philippe Leruth said: “There are blatant violations of press freedom and human rights in Turkey that are in breach of Article 19 of the International Convention of Human rights and Article 10 of the European Convention on Human Rights. The situation is escalating towards more arrests and more censorship. The international community cannot stay silent and take no concrete measure while any form of criticism on the ground is being muzzled, thus heavily threatening democratic values in Turkey”.

The federations are also concerned at widespread reports on social media that journalists accused of being “pro-Gulen” are among those expected to be arrested.

EFJ president Mogens Blicher Bjerregård added: “We are in close contact with our members in Turkey, the Journalists Union of Turkey (TGS) and the Journalists Association of Turkey (TGC), and we stand with them ready to report any new violation of the freedom of the press. To denounce the deterioration of the situation is not enough. Now the international community must act.”

More about the alerts to the Council of Europe