Confronting the crisis of transparency and censorship facing journalism in Serbia 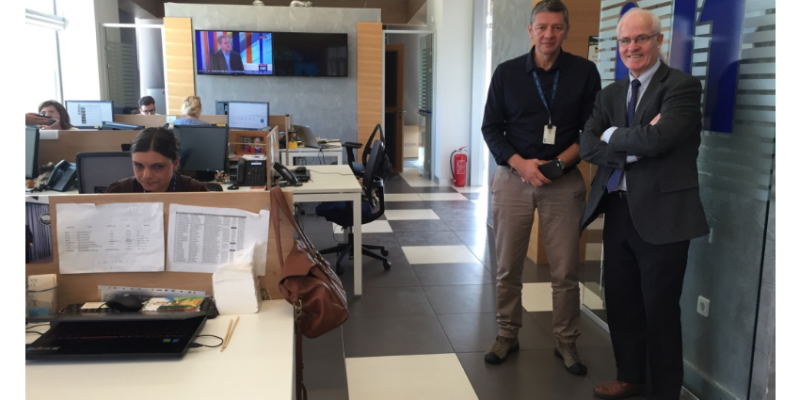 
A mission to Serbia by the Ethical Journalism Network and the European Federation of Journalists this month has called for urgent action to strengthen journalism and independent media across the country.

Aidan White, EJN Director, and EFJ Project Officer Mehmet Koksal talked with media leaders and journalism support groups during their visit on September 16-17. They found that problems of political bias, lack of transparency in ownership, manipulated state funding for favoured media, and a desperately weak economic situation all contribute to a deeply flawed media system.

“The media crisis cannot be allowed to get worse,” said White. “It poisons the democratic system and weakens public confidence. It’s time to reverse the process and build public trust in journalism.”

Their visit, in the framework of the European Union/UNESCO programme Building Trust in the Media of South-East Europe and Turkey programme, reveals the challenges facing efforts to strengthen public confidence in media when there is extensive self-censorship within journalism. The crisis was highlighted in the report by the Balkans Investigative Reporters Network (BIRN) in 2016 which concluded that “hidden control” of media is a hallmark of the media landscape.

In their talks, White and Koksal found that despite European Union pressure on Serbia to improve its press freedom standing in order to support the country’s status as a candidate for future EU membership, progress is limited. Last year’s EU Council report for 2015 noted that there had not been a marked improvement in press freedom in Serbia.
Indeed, a leading television executive said there was growing anti-EU sentiment. Although the authorities formally go along with EU policies on matters related to regional stability and security, for instance regarding Kosovo and Republika Srpska, there is strong anti-EU sentiment. “The government feels they have a free hand to do what they want with the media and journalism. They don’t give a damn about EU standards,” he says. “And EU officials seem to turn a blind eye on media violations. It is as if the EU forgot us”, he added.

Another editor of a major weekly agreed: “We can’t count on EU institutions anymore to protect press freedom in this country”, she said citing recent examples of journalists sacking for criticising the government or for simply asking a question.

The media market is made more precarious as a result of the government campaign against foreign donors which have in the past supported independent media. “Private companies or donors willing to place an ad in our magazine regularly complain about the expense,” said one news executive. “Not because our rates are expensive but because for any ad placed with us, they need to buy 10 additional in pro-government media outlet just to show they are politically unbiased.”

A lack of transparency in ownership and an unwillingness to embrace change in the face of the communications revolution also hold Serbian media back said one leading editor who said the yellow press and a “fake news industry” of corrupt editors and owner dominates the media scene.

Most of Serbia’s online media are phantom news portals, he said, with unknown ownerships defending specific interests. “It is an underground movement and like a stage for pro-opposition forces,” he said. And like in Russia, Turkey or Greece, in Serbia also unidentified social media “trolls” (paid by the authorities) are harassing independent journalists and intellectuals.

The mission also found that much-talked-about media reforms promised over the past year have not delivered any meaningful change and morale in journalism remains low. The privatisation process “was a disaster” said one daily newspaper editor. “The general media situation is as politically compromised and professionally weak as it has ever been.”
The privatisation of the media sector has deeply affected the jobs of journalists and prompted action from the Journalists Union of Serbia (SINOS) to organise recruitment tours across the country.

In the electronic media market besides the state-run broadcaster RTS there are four private broadcasters including Pink TV, which has improved its position thanks to its political support for the government. Others are the foreign-owned PRV TV (formerly FOX) and B92 TV; Happy TV, owned by a local tycoon and N1 TV is owned by the US investment fund KKR.

The problem of media concentration is supposed to be dealt with by rules which allows mergers providing they do not breach the threshold of more than 50 percent of sold circulation in the press, or more than 35 percent of audience shares in broadcasting. However, these rules are difficult to apply without ways of auditing media circulation or audience share.

The EJN and the EFJ plan to launch initiatives under the Building Trust in Media programme in October with seminars in Serbia and Kosovo to highlight the crisis of transparency and poor governance in media ownership and management. “The crisis in Serbia, just as in Kosovo, can’t be allowed to deepen,” said Aidan White. “It’s time for leading editors and managers to step up and create a more open and ethical system of management and governance. Without that, it will be impossible to strengthen journalism or build trust.”

The meetings in Belgrade and Kosovo will discuss practical strategies for ethical management of media. “If we can get editors and owners to lead it will provide a way out of the current crisis,” said Mehmet Koksal “and that will be good news for everyone working in the industry and for the audience as well.”