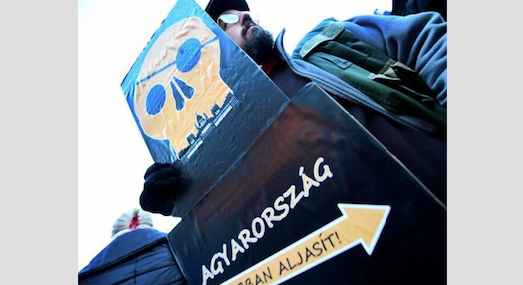 
Publication of Hungary’s biggest opposition newspaper, Népszabadság (People’s Freedom), has been suspended. The paper’s owner company Mediaworks unexpectedly announced on Saturday it would suspend both the print and online editions. The European and International Federations of Journalists (EFJ and IFJ) are shocked by this huge blow to media pluralism in Hungary.

Around 2,000 Hungarians protested in Budapest on Saturday against the closure of the country’s leading leftist newspaper. Mediaworks, owned by Austrian firm Vienna Capital Partners, said the paper was operating at a “considerable” loss and struggled with dropping circulation. But civil rights groups said the newspaper had been shut down because it had published stories critical of right-wing Prime Minister Viktor Orban‘s government.

Szilard Nemeth, vice president of the ruling Fidesz party, told the Hungarian Hir TV that “It was about time for this newspaper to be closed unexpectedly.”

A senior editor told the AFP news agency that journalists preparing stories for the October 10 edition were suddenly blocked from going to work and given letters of suspension. “We are in shock! Of course they will try and paint this as a business decision but it’s not the truth.”

“It’s a huge blow to investigative journalism and freedom of the press. Népszabadság was the largest group of quality journalists in Hungary trying to defend basic freedoms, democracy, freedom of speech, and tolerance,” the editor added.

“The country knew about (the suspension) before we did… our first thought was that it had been a coup,” said on Facebook the editors working at Népszabadság.

“It seems clear that the government and the ruling party do not want to give a chance to the opposition to express its views through an independent media,” said László Lengyel, executive co-chairman of Hungarian Press Union (HPU), the EFJ-IFJ affiliate in Hungary. “The closure of the newspaper is a violation of media freedom and a violation of labour rights.”

“We believe that Népszabadság paid for writing the truth,” said EFJ president Mogens Blicher Bjerregård. “Together with HPU, we will support the efforts of the staff to make the paper reappear as soon as possible, and to preserve the independence of the newsroom. We call on the management to start immediately the negotiation process with the representatives of HPU and the members of the work council.”

“Economic censorship is as scandalous as political censorship,” added IFJ president Philippe Leruth on Facebook. “Viktor Orban’s government is a shame for democracy.”

Sudden closure of #Népszabadság sets a worrying precedent. I stand in solidarity with #Hungarians protesting today.