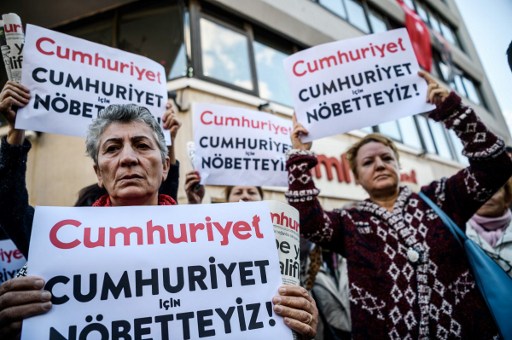 The European and International Federations of Journalists (EFJ/IFJ) today condemned the new wave of media repression by Turkish authorities following the detention of Murat Sabuncu, editor-in-chief of the newspaper Cumhuriyet, arrested this morning together with 15 other media staff of the newspaper. They are accused of assisting the so-called Fethullahist Terror Organization (FETÖ) and the outlawed Kurdistan Workers’ Party (PKK).

The police raided early this morning the houses of many journalists working at the newspaper and seized laptops and computers. According to Hurriyet, Turhan Günay, Hikmet Çetinkaya, Aydın Engin, Güray Öz, Musa Kart, Bülent Utku, Mustafa Kemal Güngör, Önder Çelik, Bülent Yener, Eser Sevinç and Murat Sabuncu were detained during the operation. The police were also searching for Akin Atalay, the head of Cumhuriyet Executive Board, who is currently abroad. Arrest warrants have been issued against 15 journalists and executives of the newspaper.

On Sunday 30 October, the home of Cumhuriyet former editor-in-chief Can Dündar was also raided by the police in the Çengelköy neighborhood of Istanbul. A detention notice was issued against the journalist, who is now abroad following his conviction earlier this year in a case related to the alleged transfer of weapons by Turkey’s intelligence agency to rebels in Syria.

Secretary General of the Council of Europe Thorbjørn Jagland again expressed his great concern about state of emergency measures: “It is highly questionable if the raid against Cumhuriyet can be justified as a proportionate measure, even under the state of emergency (…) Careful distinction must be made between violent or terrorist acts and expressions of opposition or strong criticism to the Government. Freedom of expression constitutes one of the essential foundations of a democratic society,” he said.

Johannes Hahn, EU Commissioner for European Neighbourhood Policy, also issued a statement today: “The scale of detentions, dismissals and shut-downs, notably in the media sector, based on charges of alleged terrorism, is highly questionable.”

In addition, 15 Kurdish media outlets were shut down by decree on 29 October, which brought the number of media outlets closed under state of emergency in Turkey to 168. At least 113 journalists are behind bars. Turkey is now the world’s biggest jail for journalists.