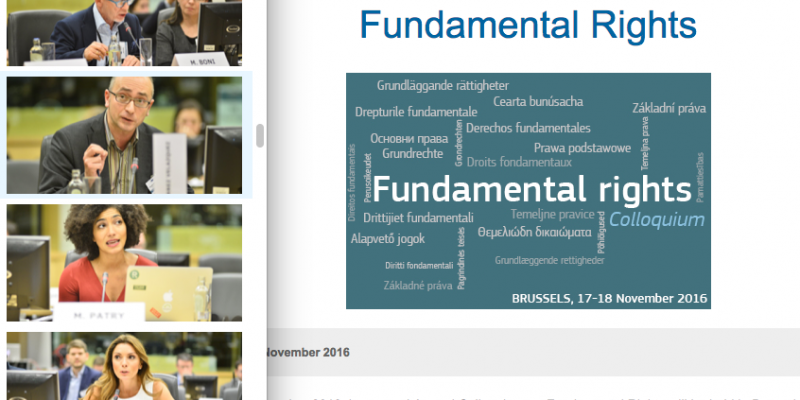 
The European Federation of Journalists (EFJ) attended on 17-18 November 2016 the second edition of EU colloquium on fundamental rights dedicated this year to media pluralism and democracy.

Hosted by Frans Timmermans, the European Commission’s first vice-president said in his opening speech that “being a journalist has become one of the most dangerous professions worldwide. Being a journalist is dangerous because of the physical dangers, it’s dangerous because of all the abuse you get all the time – online and elsewhere – it’s dangerous also because you take huge risks with the sustainability of your finances since it also is a profession which has come under huge financial pressure. For talented people, taking the risk of going into that profession, they really need a lot of idealism because of the uncertainty that comes with it”. He ended his speech by adding that “the challenges are huge, but we are determined to do something about it. We are there, if you want, to support you. I honestly believe that you have an opportunity to exchange information, to get to know each other better, hopefully to create networks.”

An exclusive survey by Eurobarometer published during the annual colloquium shows two worrying trends: a majority of EU citizens believe that the media in their countries lack independence and 75% of the respondents have experienced hate speech on social media.  Media pluralism and democracy are clearly in danger inside the EU member states as concrete examples from Croatia, Hungary (87 journalists fired from Nepszabadsag daily), Lithuania and Poland (250 journalists forced to resign from the public service broadcasting) were debated, not to mention the catastrophic situation for journalists in Turkey, still a candidate country.

The EU’s role has been discussed and sometimes critized by international participants. Some  the EU should do more on transparency, finance, independence, self-regulation, scoreboarding, combatting hate speech, training for journalists, promoting investigative journalism and protecting whistleblowers. A majority of stakeholders suggested clearly that whistleblowers in the EU member states must be protected at the EU level with a new directive.

Stating that “quality journalism is a public good”, Commissioner Věra Jourová announced “a broad public consultation inviting the input of all relevant stakeholders on what EU level can do to strengthen the protection of whistleblowers. We are looking at different options – this doesn’t mean it will be the Directive you are calling for, but we want to find the best solution.”

She also said she “consider to prioritise in 2017 funding to support actions to empower journalists to develop expertise in digital security.”

“These are positive steps in the right direction but we need a much stronger commitment from the European Commission in order to empower journalists and protect them from pressure, threats, violence, said the EFJ General Secretary Ricardo Gutiérrez. Considering the unanimous call from professional organisations, NGOs, media representatives, academics, lawyers and representatives of international organisations and trade unions, we are really disappointed by the lack of commitment of the Commission regarding the issue of whistleblowing. Together with the European Confederation of Trade Unions (ETUC), the EFJ is calling for whistleblower protection to be included in the forthcoming ‘Pillar of Social Rights’ to be proposed in the new year by the European Commission.”

The European Federation of Journalists (EFJ) has also joined a coalition to launch a petition for whistleblowers protection in the EU. The EFJ will respond to the upcoming consultation although the proposed Directive would be the best solution.