The use of social media for news is growing, says report on digital news 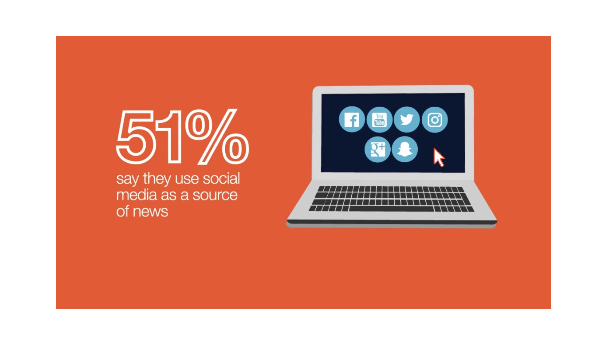 
People are more and more relying on social media for news – This is the trend highlighted in the 2016 annual report on digital news published by the Reuters Institute for the study of journalism, although traditional media outlets are still considered as valuable and trusted brands. The study also suggests that the impact on publishers’ revenues has to be addressed. The use of platforms, social networks and mobiles should be combined with sustainable business models.

The digital news report 2016 confirms what many studies highlighted before: television news and online news are the most frequently accessed in most countries while readership of printed media newspapers has declined significantly. However, the new trend shows that the percentage of news accessed via social media is growing everywhere. A small majority (51%) said they use social media as a source of news each week, while the EU average (17 countries surveyed) reaches 46%. The study also shows that an increasing proportion depends on it for direct consumption. Within the EU, at least one in ten say social media are their main source of news with a high figure in Greece (27%). Facebook (44%) is by far the most important network for finding, reading, watching and sharing news.

The study confirms the rapid adoption of smartphones for news (53%) in most of the countries surveyed. However, computer usage is falling and growth in tablet has slowed. This trend is particularly important in the United Kingdom, where 70% of the BBC traffic comes from mobile devices. This is the reason why some brands like Buzzfeed are investing more in apps. It is a way to push content with alerts and notifications.

The study shows big differences in the level of trust in the news. Western European and Scandinavian countries scored relatively highly. Trust is lower in Southern European countries like Greece (only 20%). There is a correlation between the perception of political and commercial influence and the level of trust. More surprising, the data shows that everywhere news brands are more trusted than journalists – with the exception of France. It means that even in the new era, traditional news outlets still matter.

A very interesting, for some surprising or even worrying  outcome is that many people prefer computer algorithms from editors’ choices. One way to interpret this is that readers think they are the best judge of what they want. However, respondents do fear that key information or challenging viewpoints might be lost in an algorithmically filter bubble.

The impact of these findings on the publishers’ business model is significant. The study shows that they are losing control of distribution – with the growth of social media – and of advertising revenue – with the rise of ad-blocking (they are 38% in Poland, 36% in Greece, 30% in France to block advertisements on their devices). Although the digital environment enabled publishers to reach more people, it is today a big problem to keep monetising these audiences online. Finding a sustainable business model while guaranteeing quality journalism is the key challenge that need to be addressed as soon as possible.

The European Federation of Journalists together with the Friedrich Naumann Stiftung, Brussels office will organise a lunch debate on 30 May on “Quality journalism for an informed society: innovation and finances” focusing on conditions to allow journalists, media and democracy a sustainable future. The findings of this report will be an interesting basis for discussion.

The survey was conducted by YouGov using an online questionnaire at the end of January/beginning of February 2016, in 26 countries around the world.