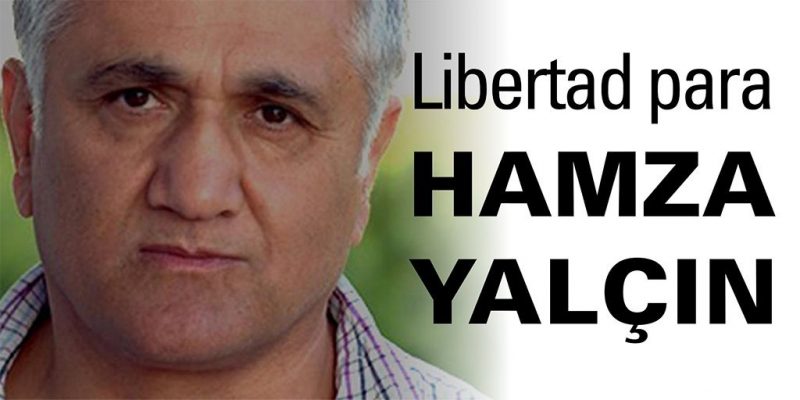 
UPDATE (24/08/2017):  Hamza Yalçin publishes letter in El Periodico criticising his arrest in Spain
The International and European Federation of Journalists (IFJ and EFJ) together with its affiliates in Spain and Sweden have strongly condemned the continued imprisonment of Swedish-Turkish journalist Hamza Yalçin by Spanish authorities since 3 August 2017.

“It turns out that Tayyip Erdogan declared me a terrorist because I have written and spoken against him and he warned Interpol to capture me and deliver me. The Spanish authorities, therefore, detained me and imprisoned me. I would hope that the Government of Sweden, a country to which I came as a political refugee and in which I am now a citizen, would definitely protect its own sovereignty and democratic values“ says Yalçin in the letter published on 22 August.

The arrest occurred in Barcelona following an international Interpol warrant issued by Turkey over alleged terrorist plots. The journalist has criticised his arrest which was made under orders of the Turkish government and has demanded his release.

“I have not done any illegal activity in Sweden or in Europe. I consider it contrary to human rights that Spain imprison me for my political activities, which Sweden recognizes as legal, to deprive me of my work, to limit my relations with the world to a minimum and to prepare myself for extradition to Turkey”, wrote the journalist.

Yalçin denies the accusation that he is a member of the THKP-C, an organization designated as a terrorist group by the Turkish government: “I am an author of the legally published Odak magazine and the coordinator of the Education and Solidarity Movement. I am a freedom fighter who uses pacifist tools and methods”.

The IFJ/EFJ urges the Spanish authorities not to hand Hamza Yalçin over to the Turkish authorities as the safety of the journalist and the judicial independence of a trial would not be guaranteed for him in Turkey, where around 160 journalists remain behind bars, according to IFJ/EFJ statistics.

The European and International Federation of Journalists (EFJ/IFJ) together with its affiliates in Spain and in Sweden have strongly condemned the arrest of Swedish-Turkish journalist Hamza Yalçin by Spanish authorities. The arrest occurred last week in Barcelona following an international warrant issued by Turkey through Interpol over alleged terrorist plots.

The EFJ/IFJ urges the Spanish authorities not to hand Hamza Yalçin over to the Turkish authorities as the safety of the journalist and the judicial independence of a trial would not be guaranteed for him in Turkey, where around 160 journalists remain behind bars, according to IFJ/EFJ statistics.

According to Turkish Dogan news agency, Turkey issued a detention order in April against Yalçin with the accusation of insulting the president Erdogan in an article published in Focus, a Turkish magazine. He is also accused of having “terrorist links” with an illegal extreme left-wing group based on two articles he published as the editor-in-chief of Odak Dergisi, reports added.

Responding to the Interpol warrant, Spanish authorities arrested Hamza Yalçin in Barcelona’s El Prat airport on 3 August while he on his way to London for holidays. He has been held in prison since 4 August following the decision of the Spanish National Court.

Turkey now has 40 days to submit the accusation file and make the petition of his extradition official. The decision will rest with the Spanish National High Court, even if the government of Mariano Rajoy would have the last word, reports added.

“We join our affiliates and urge the Spanish National High Court and the government of this country not to hand the journalist Hamza Yalçin over to the Turkish authorities,” said IFJ President Philippe Leruth.

“Due to the extreme repression against independent voices by the government of Recip Tayyip Erdogan, we fear for the safety and the respect of our colleague’s democratic rights and see these charges of ‘terrorism’ as yet another pretext to persecute the free and critical press in Turkey,” he added.

The Swedish foreign ministry has asked to be allowed to visit the journalist in Barcelona and has also made sure that he has a lawyer and is working to clarify the charges, the Swedish Foreign Minister Margot Wallstrom told media.

“We welcome the involvement of the Swedish Foreign Ministry who have asked the Spanish authorities to handle the process in accordance with the humanitarian international treatments such as the European Convention for the Protection of Human Rights and Fundamental Freedoms,” said EFJ President Mogens Blicher Bjerregård.

“We join our Swedish affiliate in requesting the Spanish authorities to reject the extradition and urge the Swedish government to do the same. We show solidarity with our Turkish colleagues in Turkey, and with exiled Turkish colleagues living in EU member states. The EU and its member states cannot allow the government of Recip Tayyip Erdogan to target critics, especially if they are living abroad.”

Yalçin, 59, is a dual Swedish-Turkish citizen who has lived in exile in Sweden since 1984. He is the editor-in-chief of Odak Dergisi magazine, a socialist publication critical of the Turkish government, and involved in Amnesty International and PEN International organisations. He is also member of the Swedish Writers Association.

Last year’s failed coup in July saw president Erdogan and his ruling Justice and Democratic Party (AKP) begin a nationwide crackdown on dissent voices, including the forced closure of hundreds of media outlets and civil society groups and the  jailing of around 160 journalists, making the country into the world’s leading jailor of reporters.