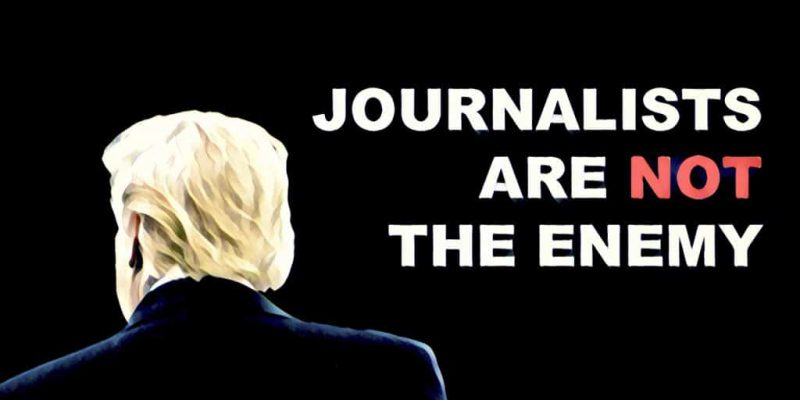 
At this time of an unprecedented assault on the free press of the United States by the Trump administration, the European Federation of Journalists stands in solidarity with US journalists as they do their crucial work.

Professor Rasmus Kleis Nielsen (Reuters Institute) commented for the European Journalism Observatory that “Trump professes a strong dislike for much of the media, labelling those who have the temerity to offer anything other than unconditional support “the enemy of the American people”, and repeatedly discounting news organisations like ABC, CNN, and the New York Times as “fake news”. Trump is not alone. Powerful politicians all over the world clearly do not like the idea that there are independent institutions trying to hold them to account. Self-styled strongmen from Italy to India, from Poland to the Philippines, from Ecuador to South Africa have long tried to tame the news through public attacks, political pressures, and murky commercial arrangements. (…) It is precisely because free news media are not “the enemy of the people” that they are under attack by those politicians who would prefer adulation to critical scrutiny.”

Rasmus Kleis Nielsen believes that standing up for the principles of professional journalism is just a first step to fighting back. “Demonstrating that commitment in practice is even more important. (…) To hold power to account effectively, journalists and news media have to stand up for their principles, practice what they preach, and convince the public that they are in fact just doing their jobs.”

The EFJ fully shares Nielsen’s views: the real issue is how journalists can gain and retain people’s trust, hold power to account, with the public on their side.

One year ago, in Bucharest, the Annual Meeting of the European Federation of Journalists adopted unanimously a resolution expressing “its total rejection to the offensive and negative attitude of the US President against the media that are not favourable to him,” and calling on US media “to continue in their critical work, as an example of democratic normality.”

“We should remind more than ever before that journalism is a public good,” insists EFJ General Secretary Ricardo Gutiérrez. “It’s our duty to demonstrate the people that we work for the public, not for partisan interests. Trust requires more transparency from journalists and a real inclusive participatory process.”

Dan Gillmor, director of the Knight Center, wrote a few days ago in Medium that he is begging journalists “to declare a sweeping mission. You need to fight, not against Trump, but for a free press and freedom of expression, in every possible way. Most of all, you have to do more journalism, with renewed passion, skill, relentlessness, and — this is essential — collective action.”