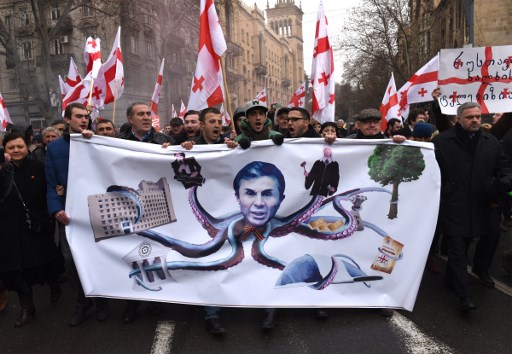 
Georgian main opposition TV channel Rustavi 2 faced mass resignations after the new management has fired several prominent journalists and producers in early September. The Independent Association of Georgian Journalists (IAGJ) warns against a clear attempt at political control over the media in Georgia and denounces the inaction of the international community to improve media pluralism in the country.

Rustavi 2 is one of the most watched TV channels in Georgia and was once known as the main opposition television company, close to the United National Movement party. Since the new shareholder Kibar Khalvashi named his lawyer Paata Salia as new Director-General in July 2019, journalists feared for a change in the TV editorial policy. It took a month for the new management, from now close to the ruling party, to dismiss well-known faces of the channel. Salia said that they were “in conflict with the interests” of the new owner. To voice their discontent, more than 60 journalists resigned to this day.

The crisis at Rustavi 2 is confirming a trend, that has been going on for years, of reducing critical voices. The situation is worrying in many aspects: over 1,000 journalists were fired in the last few years and social condition of journalists are in decline; authorities control major national TV channels, and the advertisement market and funding to independent media; internet is the last media where critical information can be published freely, according to the IAGJ, while there is an increasing number of Russian funded online news websites – putting in jeopardy the credibility and independence of Georgian media.

“International community must push Georgian government to distance itself from the media. Attacks on journalists have been often ignored in recent years by international organisations and diplomatic corp in Tbilisi, giving green light to the authorities to tighten pressure on media. The situation at Rustavi 2 is the result of years of pressure against independent media. But it is the visible part of a general alarming decline in media freedom,” alerted Zviad Pochkhua, IAGJ President.

“Georgia’s president Salome Zurabishvili said she wants her country to move closer to Europe. If this is really her ambition, it is high time that Georgia adopted the European standards for the protection of journalists and freedom of the press. Much remains to be done in Georgia to ensure the development of a free and independent media sector,” said Ricardo Gutiérrez, General Secretary of the European Federation of Journalists (EFJ).

The EFJ joined its Georgian affiliate IAGJ in calling for international organisations to encourage the development of independent media and to restore media pluralism in the country.