EFJ calls on EU to enhance protection for journalists 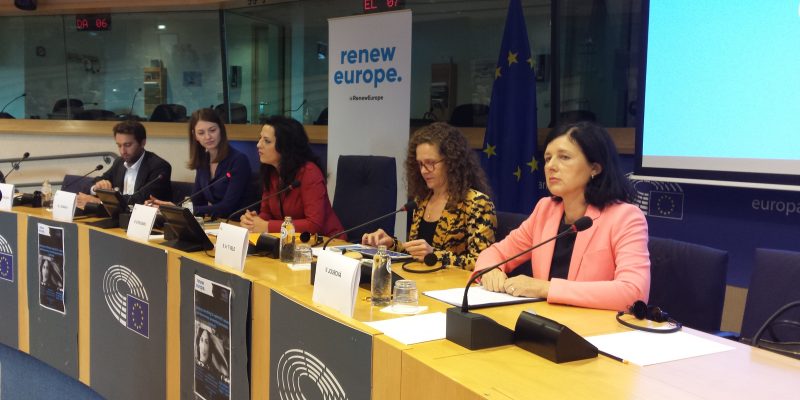 
The European Federation of Journalists (EFJ) has participated today at the European Parliament in the workshops and the conference ‘Risking everything to uphold EU values and democracy: protecting journalists in the EU’, organised by Renew Europe Group and Romanian MEP Ramona Strugariu.

Daphne’s son, Matthew Caruana Galizia, made a tribute to her work and her legacy. In this sense, Vice-President Designate of the European Commission for Values and Transparency Věra Jourová insisted in finding “what happened: maybe we will not get the answers, but we should ask the questions”. She said that she will meet in the coming days Dutch MP Pieter Omtzigt, Council of Europe rapporteur on “Daphne Caruana Galizia’s assassination and the rule of law in Malta and beyond.”

For the next five years, Commissioner Jourová promised to work close to the journalists, specially focusing on media pluralism, fighting disinformation, media literacy, hate speech against journalists, looking for new and sustainable ways of financing independent media and concentrating in the role of the media on the rule of law, as according to her and many of the participants, “the fight for the rule of law is not a legal matter but a political one”. Many Members of the Parliament from different groups, including Anna Júlia Donáth (Renew), David Casa (EPP), Stélios Koúloglou (GUE), Julie Ward (S&D), Daniel Freund (Greens), Dragoş Tudorache (Renew), and representatives of European organisations demanded the EU to protect more effectively journalists and investigative journalism.

The event included two different workshops. The first one was called ‘Creating an enabling regulatory environment for free, independent, pluralistic, and diverse media and the safety of journalists’. The EFJ called on the EU to push its members states to fully implement the 2016 Council of Europe Recommendation on the protection of journalism and safety of journalists and other media actors. “Every single government of the 28 members states of the EU signed it, three years ago, but not a single one fully implemented it,” said Ricardo Gutiérrez, EFJ General Secretary.

The second workshop was named ‘Identifying financing priorities for supporting sustainable models of independent journalism’. EFJ Director Renate Schroeder presented the EFJ report “Digital Journalism & New Business Models”, which underpins the trends in new business models for the digital newsroom and the so-called entrepreneurial journalists who take care of both fundraising and the newsroom and still achieve trusted journalism with the highest editorial standards, values that ground the fourth estate in a democratic society in order to hold the powerful to account.