​Policy paper: How the EU can protect public watchdogs from abusive lawsuits 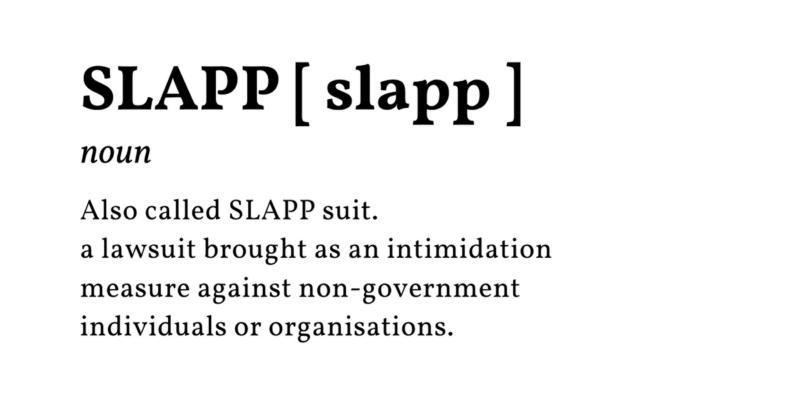 
The Coalition Against SLAPPs in Europe (CASE), which reunites journalists, press freedom, and other rights groups – including the European Federation of Journalists (EFJ) – has been advocating for an EU anti-SLAPP directive for two years. As part of the public consultation launched by the European Commission, the CASE coalition has submitted the following policy paper to inform the upcoming EU initiative.

Accessible here, the paper explains what SLAPPs are, provides preliminary and previously unpublished data from CASE research on SLAPPs mapping in Europe and sets out recommendations on what governments and the EU should do tackle the problem. Here are the key points.

A wide range of public watchdogs are targeted by SLAPPs

SLAPPs are abusive lawsuits filed with the purpose of shutting down acts of public participation, including public interest journalism, peaceful protest or boycotts, advocacy, whistleblowing, or simply speaking out against abuse of power. SLAPPs target anyone who works to hold the powerful to account or engage in matters of public interest: so-called “public watchdogs”. This includes journalists, activists,  rights defenders, whistleblowers, civil society organisations, trade unions and professional associations, academics.

SLAPPs are on the rise across the EU

As part of a global trend, the use of SLAPPs to intimidate and silence public watchdogs is on the rise in the EU. An insufficient awareness of the issue has prevented a regular and comprehensive mapping of SLAPPs, and their effects, across the EU. Nonetheless, a rising number of SLAPP suits or threats thereof have been exposed in recent years by civil society organisations. Between 2019 and 2021, CASE collected data from its members and from other civil society groups on apparent SLAPPs filed between 2010 and 2021, which led to the identification of 539 verified SLAPP cases across Europe. Key preliminary findings of this mapping work reveal that:

While CASE mapping represents to date the most comprehensive effort to map out SLAPPs across Europe, it is important to note that any such effort is inherently limited by the chilling effect such lawsuits create. Many SLAPP victims prefer not to draw attention to their lawsuit out of fear of further retaliation or reputational damage. In addition, SLAPPs that end up in court do not reflect broader, more insidious patterns of legal intimidation, such as the use of aggressive legal threats. As worrying as it is, the information collected only represents the “tip of the iceberg”.

The use of SLAPPs and legal intimidation chills the speech of those working to hold the powerful to account, blocking the ability to expose wrongdoing and shutting down publication on matters of public interest. SLAPPs weaken democracy by preventing individuals and civil society organisations from engaging in public debate and impeding the exercise of rights to free speech, assembly, and association.

As such, SLAPPs go against the values on which the EU is founded, including democracy, the rule of law and respect for human rights. But SLAPPs have a broader, detrimental impact on the EU legal order. By impairing public watchdogs from doing their job, SLAPPs are a threat to the effective enforcement of EU law and hinder the effective legal protection of rights under EU law. As SLAPPs distort and abuse judicial remedies, they may also undermine the trust between the EU member states’ legal systems, posing a threat to access to justice and judicial cooperation. SLAPPs are also a threat to the freedom of movement as they discourage potential targets from confidently operating in jurisdictions where the risk of such abusive litigation is higher than elsewhere in the EU.

Insofar as states are committed to the respect and protection of human rights and fundamental values of democracy and rule of law under international and regional human rights instruments, as well as the EU Treaties, they have a positive obligation to counter and provide protection against SLAPPs.

SLAPPs operate through the litigation process whereby the outcome is generally of less importance to the filer. As such, anti-SLAPP measures need to be introduced to ensure this process causes as little harm to the victim as possible. This means accelerated proceedings that can filter out SLAPPs as quickly as possible, sanctions to punish SLAPP litigants and deter further SLAPPs, and financial support and compensation to enable SLAPP victims to fight off SLAPPs on an equal footing without being drained of resources and morale in the process. These protective measures should go hand in hand with steps to bring laws criminalising speech, such as defamation, in line with human rights standards, with awareness-raising and capacity-building initiatives, and with reflections on how to address SLAPPs in legal ethics.

The EU has a key role to play

Given the scale and nature of the problem, the EU has the responsibility, and enjoys the necessary power and competences, to set standards and measures to inform and improve actions taken by the Member States. The scope of EU action needs to be as wide as possible so as to provide effective protection against the range of tactics used by SLAPP litigants. To that effect:

– take steps to bring laws criminalising speech, such as defamation, libel and slander, in line with international human rights standards

– promote a discussion on legal ethics and professional standards

– engage with and aid actors that can provide support and assistance to targets.