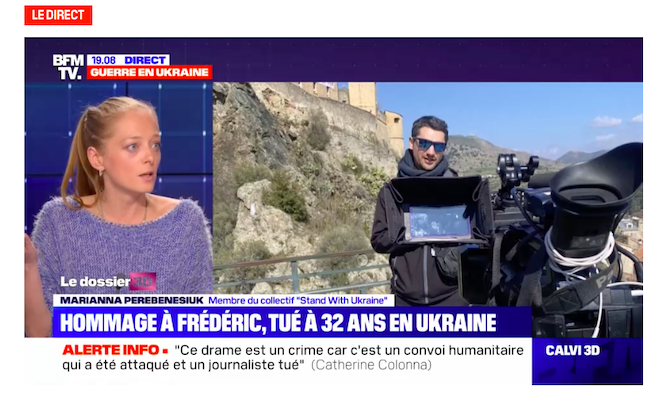 
French BFM TV journalist Frédéric Leclerc-Imhoff was fatally injured today while covering the evacuation of civilians from the cities of Severodonetsk and Lyssychansk in Ukraine. His colleague Maxime Brandstaetter was slightly injured in the attack. The European Federation of Journalists (EFJ) expresses its condolences to the family and relatives of Frédéric Leclerc-Imhoff.

The Luhansk regional governor said on 30 May in the afternoon that the Russians shelled a car that was on its way to pick up ten civilians. Frédéric Leclerc-Imhoff was sitting in the car covering the evacuation operation when a piece of shrapnel pierced the armoured vehicle and hit the journalist in the neck. He was accompanied by journalist Maxime Brandstaetter, who was slightly injured in the strike, and their fixer Oksana Leuta, who was not hit.

Frédéric Leclerc-Imhoff, 32 years old, worked for French commercial channel BFM TV for six years as a freelance camera operator. This was his second assignment in Ukraine since the Russian invasion began on 24 February.

The editorial staff of BFM TV said: “The pain is immense. Frédéric was a courageous and discreet journalist. We have lost a colleague and a friend. Our thoughts are with his family, his friends, and Maxime Brancht who was with him and to whom we spoke”.

Leclerc-Imhoff is the 12th media worker killed while covering the Russian invasion of Ukraine.

The President of the National Union of Journalists of Ukraine (NUJU) Sergiy Tomilenko said: “Today, dozens of Ukrainian and international journalists are on the front lines. They risk their lives every minute to tell the world the truth about this unjust war. Journalists are important! We demand a special tribunal over Russia for crimes against civilians, against journalists.”

EFJ General Secretary Ricardo Gutiérrez said: “We are deeply saddened by this tragic news and our thoughts tonight are with Frédéric’s relatives. This crime cannot go unpunished. We pay tribute to all the journalists who have risked their lives since the beginning of the conflict and thank them for the work they do to inform citizens around the world.”

French Journalists’ unions (SNJ, SNJ-CGT, CFDT-Journalistes) demanded that the authorities do everything possible to clarify the precise circumstances of this tragedy as soon as possible.