PRISM Final Conference: “Words are Weapons: Strategies, policies and initiatives to fight against online hate speech in the EU”

WORDS ARE WEAPONS
Strategies, policies and initiatives to fight against online hate speech in the EU
14th May, 2016 (9.00 – 13.30)
City Hall of Pozzallo, Italy 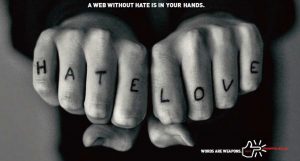 SYNOPSIS
Many surveys, studies and reports show that in the Member States, continued and renewed physical or
verbal attacks against minority groups and immigrants are considerably increasing, as marked by the latest
reports of the Fundamental Rights Agency of the EU (FRA) on physical assaults, harassments or threats
against immigrants or Roma people. Not only hate crime is increasing, but recent research show that hatemotivated
violence is more and more often accompanied or encouraged by hate speech. The high
propagation potential of the Internet fosters the frequent expression of national, racial or religious hatred
statements which constitute incitement to discrimination, hostility or violence and it can be argued,
without any doubts, that online hate speech represents today one of the biggest threats to the democratic
life of the European Union. Hate speech is also more evident in the current geopolitical framework,
particularly in a time when the European Union is facing an unprecedented migration challenge as a result
of the human flows fleeing from Countries affected by war, destruction and desolation. In this particular
historical phase, when the discussion on border management and security issues is prevailing, media and
politics rhetoric risk to offer an easy arena for hate speakers and civil society, institutions and responsible
media have to make all possible efforts to stop this phenomenon.
In global times, hate becomes global too and, although some European Countries are now adopting new
legislation with the aim to tackle hate speech, there is still a lot to do. On one hand, the uncontrollability of
the web and the massive diffusion of the social networks call for structured counterbalancing actions
which, far from questioning the freedom of expression of the Internet users, should regard individual
responsibility as a key element for a real cultural change. On the other hand, the rise of the cultural, social
and political phenomenon of online hate speech calls for more effective action and stronger involvement of
all governance levels, policy makers, social network providers, associations and citizens in order to tackle
this threat by producing a major social and cultural shift towards the acquisition and enhancement of
values like respect, acceptance, mutual understanding and co-existence with diversity.
The conference “Words are Weapons: Strategies, policies and initiatives to fight against online hate
speech in the EU”, which will be held in Pozzallo, Sicily, on 14th May 2016, addresses the aforementioned
themes with the aim to animate a wide European debate on the most effective strategies and policies
which can be used at local, national, EU and international level to tackle online hate speech. During the
conference, which will be addressed mainly to European Institutional representatives, civil society
organizations’ representatives, representatives of traditional and new media and experts, the partners will
present the main activities and outcomes of the project. The event is part of the project “PRISM –
Preventing, Redressing and Inhibiting Hate Speech in New Media”, co-funded by the Rights, Equality and
Citizenship Programme of the European Union and is held in the framework of the SABIR Festival organized
by ARCI, an important Euro-Mediterranean event which takes place every year in a symbolic location on the
Europe’s borders to discuss relevant themes like migration and integration. Sicily and in particular Pozzallo,
a landing place and cultural crossroad in the heart of the Mediterranean Sea, were chosen as the Festival’s
location to highlight the collective responsibility for the 3,500 migrants – men, women and children – who
lost their lives in the Mediterranean Sea in 2015.

PRISM – Preventing, Redressing and Inhibiting Hate Speech in New Media
Hate crime and hate speech are directly connected. Both have a huge impact on the victims: words are weapons
for the minority groups and migrants hit by online hate speech. The Prism project aims at developing effective
strategies and practices for promoting a better use of language, in order to promote a culture of respect and the
consequences of hate speech.
Implemented in five partner countries (Italy, France, Spain, Romania and UK), the PRISM project is based on an
interdisciplinary strategy. It combines research, best practices and training activities addressed to law
enforcement officers, lawyers, journalists, bloggers, social networks’ administrators, young people, teachers and
youth workers.
The ambitious objectives of the project are:
· to raise awareness on hate speech with national and European studies
· to identify, investigate and fight hate speech and hate crimes through mapping the incidence of hate
speech in websites and social media
· to monitor online hate speech through a constant data collection on the phenomenon,
· to develop effective tools, as national legislation, and redressing mechanisms for contrasting online
discrimination, hostility and violence
· to raise awareness by means of a European campaign and communication tools.
The project can count on a qualified and diversified partnership including research institutions (University of
Barcelona, Institute for International Legal Studies of the Italian Research Council, the United Nations
Interregional Crime and Justice Research Institute, Cittalia), civil society organisations (Arci, La Ligue de
l’enseignement, SOS Racismo Gipuzkoa, ROTA, Fundatia Dezvoltarea Popoarelor, Carta di Roma) and an Equality
Body (UNAR).
The PRISM project is co-funded by the Rights, Equality and Citizenship Programme of the European Union.
PRISM website: www.prismproject.eu