The struggle for press freedom in Turkey 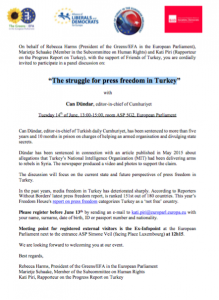 The struggle for press freedom in Turkey_invitation

On behalf of Rebecca Harms (President of the Greens/EFA in the European Parliament), Marietje Schaake (Member in the Subcommittee on Human Rights) and Kati Piri (Rapporteur on the Progress Report on Turkey), with the support of Friends of Turkey, you are cordially invited to participate in a panel discussion on:

“The struggle for press freedom in Turkey”

with
Can Dündar, editor-in-chief of Cumhuriyet

Can Dündar, editor-in-chief of Turkish daily Cumhuriyet, has been sentenced to more than five years and 10 months in prison on charges of helping an armed organisation and divulging state secrets.

Dündar has been sentenced in connection with an article published in May 2015 about allegations that Turkey’s National Intelligence Organization (MIT) had been delivering arms to rebels in Syria. The newspaper produced a video and photos to support the claim.

The discussion will focus on the current state and future perspectives of press freedom in Turkey.

In the past years, media freedom in Turkey has deteriorated sharply. According to Reporters Without Borders’ latest press freedom report, is ranked 151st out of 180 countries. This year’s Freedom House’s report on press freedom categorizes Turkey as a ‘not free’ country.

Please register before June 13th by sending an e-mail to kati.piri@europarl.europa.eu with your name, surname, date of birth, ID or passport number and nationality.

Meeting point for registered external visitors is the Ex-Infopoint at the European Parliament next to the entrance ASP Simone Veil (facing Place Luxembourg) at 12h15.

We are looking forward to welcoming you at our event.