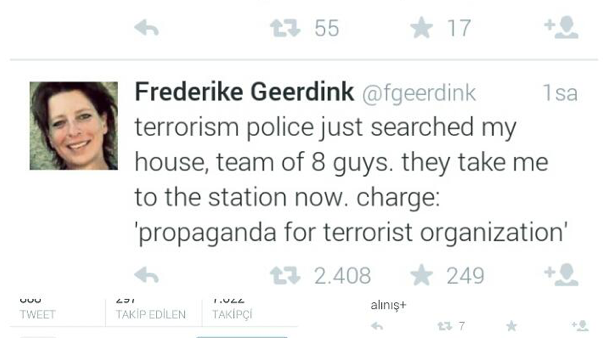 
The Dutch journalist Fréderike Geerdink, permanent female media correspondent in Turkey for several media outlets (The Independent & Al Monitor), has been arrested today (06/01/2015) by a group of Turkish police anti-terrorism unit. “Terrorism police just searched my house, team of 8 guys. They take me to the station now, charge [sic]: ‘propaganda for terrorist organization”, wrote Geerdink on Twitter reporting about her own arrest.

Fréderike Geerdink is specialised in the Kurdish issue (www.kurdishmatters.com), she wrote a new book about the Roboski massacre, she lives and works in the city of Diyarbakir. During the past few days, she was receiving unfriendly messages from Turkish social media users accusing her of conducting propaganda on behalf of the Kurds.

Bert Koenders, the Duch Minister for Foreign Affairs, is currently visiting Turkey and he was the first to react on Twitter regarding her arrest. He promised to raise this issue during the meeting in Ankara with Mr. Mevlut Cavusoglu, Turkey’s Minister of Foreign Affairs.

Thomas Bruning (NVJ – from the Dutch Association of Journalists) has also immediately reacted to Geerdink’s arrest.”We are shocked that the Turkish government is so brutal against foreign journalists. It is worrying that the police took her phone which means that not only the journalist but also her sources are in danger.”

“It is obvious that the Turkish government is determined to silence every single independent voice in the country,” said the EFJ President Mogens Blicher Bjerregård. “After targeting the opposition press, it is now attacking the probably only foreign journalist based in the Kurdish zone of the country. We call on international organisations to denounce this repressive escalation against the press in Turkey.”

After 3 hours of interrogation, Geerdink was released according to the last media reports. “We have good news at the end but we will report and monitor any violation of media freedom. This is a clear act of intimidation which shows that press freedom and freedom of expression on social media in Turkey is definitely under extreme surveillance and pressure,” concluded the EFJ President.