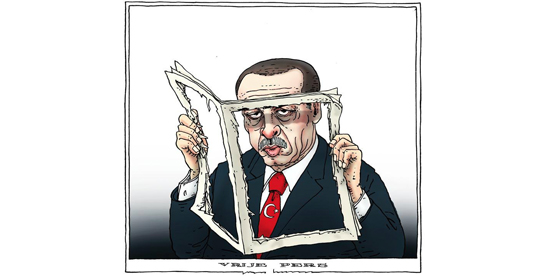 
One day after the anti-terror police interrogation imposed to journalist Fréderike Geerdink for some messages sent on Twitter, another Dutch journalist has been arrested today (07/01/2015) and will have to answer question for a picture taken in 2013 with a smartphone during a press trial.

The Dutch-Turkish journalist Mehmet Ülgur has been arrested today at the airport in Istanbul (Turkey). The NVJ (Dutch Association of Journalists) has immediately reacted and informed the Dutch Ministry of Foreign Affairs about this new case. “Mr Koenders (Dutch minister of Foreign Affairs) is still in Turkey. Maybe that can make a difference”, hopes the NVJ Secretary Thomas Bruning.

Mehmet Ülgur, travelling with his wife Astrid van Unen, has been removed from the queue at customs and taken to the offices of the airport security. There, the journalist has been told that he will be immediately brought to a police station for interrogation and later will have to appear in front of the court. “The situation is pretty relaxed. He is standing outside and smokes a cigarette », said his wife. Ulgur has been informed that he needs to answer questions related to an incident in September 2013 in which he used his mobile phone in a courtroom in Turkey to make some photographs during a trial.

In the framework of an EU backed project called “Campaign to Decriminalise Turkish Journalism, to free speech and protect work place rights “, the European Federation of Journalists (EFJ) is regularly sending European journalists and trade unionists to observe and monitor press trials in Turkey where journalists are being prosecuted for years for their work in several politcally motivated cases (like OdaTV, KCK Press, Ergenekon,…). “The EFJ strongly supports Mehmet Ülgur and his work has been highly appreciated to get correct and independent information about the case of Füsun Erdogan and other journalists”, said the EFJ.

According to last informations received by the EFJ, the Dutch journalist Mehmet Ülgur has been released now on condition that he will appear before the court on 21 January.

Many thanks to Joep Bertrams (@JoepBertrams) for his drawing (originally published in “De Groene Amsterdammer”, 18 December 2014).