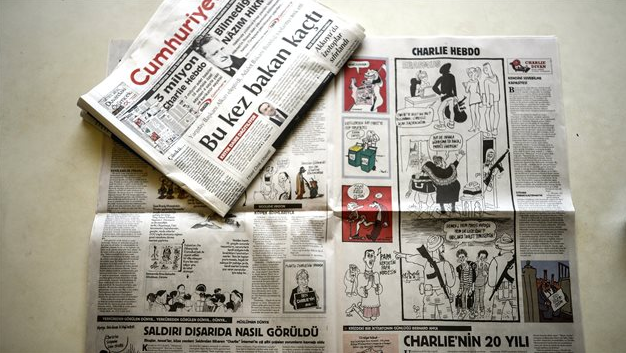 
In solidarity with the victims of Charlie Hebdo, the Turkish daily Cumhuriyet (“Republic”, kemalist and secular newspaper) published on January 14, selected excerpts from the latest issue of Charlie Hebdo, avoiding its cover image on Prophet Mohammed. The eve before the publication, the police stopped and seized the truck delivering the newspaper. Having realised that Cumhuriyet did not publish the cover image on Prophet Mohammed, they handed over the truck to the newspaper after one hour.

Following the incident, the Journalists Union of Turkey (TGS) and the European Federation of Journalists (EFJ), strongly condemns the attempt to hinder the work of journalists at Cumhuriyet.

“The attempt to censor Cumhuriyet clearly violates Articles 28, 29 and 30 of the Constitution. This case shows that the government clearly tramples upon the right of its people to freedom of speech and freedom of information, ” said Ugur Güç, President of the TGS.

“The government cannot claim that they are acting democratically when they try confiscate the newspaper before its publication.  We condemn the abuse of power by the authorities to deprive the people’s right to be informed,” said the Journalists Platform G9 in a press release.

Mehvis Evin, columnist for the daily Milliyet, was also victim of censorship as his employer refused to publish his editorial on Charlie Hebdo.

On Wednesday, the EFJ learned that a Turkish court had ordered to block websites that had re-published cartoons about Prophet Muhammad by Charlie Hebdo. Moreover, Istanbul prosecutors  announced an investigation into two columnits (Ceyda Karan and Hikmet Cetinkaya) writing for the daily Cumhuriyet, who illustrated their columns on Wednesday with the controversial Mohammed cartoon.

“It is incomprehensible that Turkey’s Prime Minister Ahmet Davutoglu was participating to the Freedom of Expression March in Paris while censoring newspapers and journalists who shares solidarity with Charlie Hebdo’s journalists. The Turkish authorities should step up their efforts in ensuring the safety of journalists and freedom of speech in the country,” said Mogens Blicher Bjerregaard, EFJ President.

Citing the case law of the European Court of Human Rights, the EFJ President recalls that the notion of freedom of expression is “applicable not only to ‘information’ or ‘ideas’ that are favourably received or regarded as inoffensive or as a matter of indifference, but also to those that offend, shock or disturb the state or any sector of the population. Such are the demands of that pluralism, tolerance and broadmindedness without which there is no democratic society.”