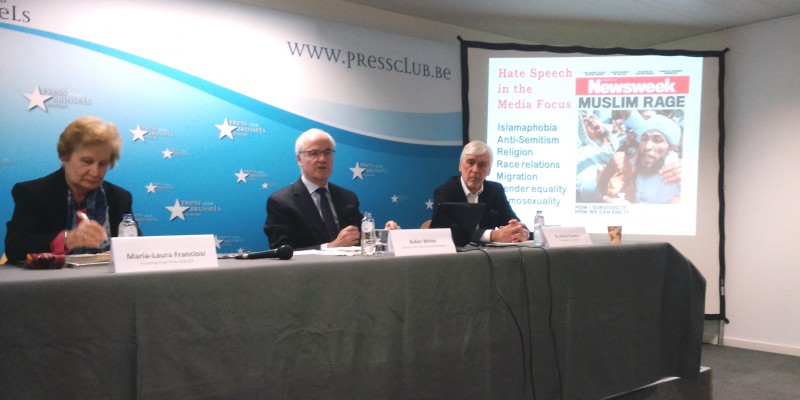 “There is a major crisis in the media industry today,” started Aidan White (EJN). “We need to keep journalism meaningful and start thinking how journalism can fight against hate speech. When we have hate speech coming directly from the mainstream media, we need to change.”

The director of the EJN explained how influential media sometimes creates a climate of hatred and how this situation can be avoided. “It’s not because something is outrageous that it make news. (…) We need to show humanity when we tell stories. Otherwise, there are people who could be hurt.”

In response to the increasing violence, journalism has a bigger responsibility than ever. According to White, the rush to re-publish is not an ethical way of practicing journalism. More attention should be given to slow journalism and media workers should always follow five essential points. The journalist must be accurate, independent, impartial, human and accountable.

Today, social media, which is often quicker than traditional media, has changed the whole informative structures. Hate speech, pictures or videos are shared on social networks before they reach traditional media. Often, journalists are not responsible for hate speech as they just report it. But journalists should have the right to decide whether they want or not to report on certain matters.

“The impact on the audience is something that most European journalists forget,” concluded Aidan White “We need more structures to engage in dialogue in order to sustain journalism.”