The temporary release of Macedonian journalist Kezarovski is insufficient 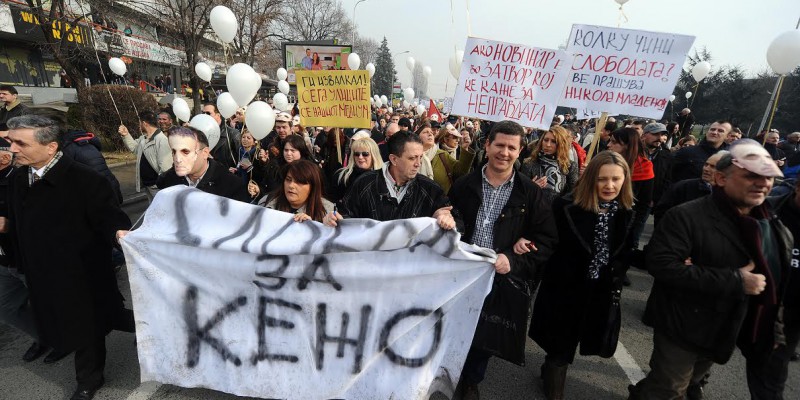 Around 3,000 demonstrators gathered today from midday onwards in Skopje to denounce the two year jail sentence that the Macedonian Court had imposed last week on Kezarovski allegedly for revealing the identity of a witness in a murder case.

In a move that stunned the public, Kezarovski was granted temporary release from prison on health grounds and was able to join the demonstrations. Kezarovski, now due back in prison on 18th February denies making any such request but was able to address and thank the crowd that had come out to denounce his situation and ask for his permanent release.

“Kezarovski is an innocent journalist who should never have been jailed for doing his work. The court’s decision is shameful and we demand his immediate release,” said Jim Boumelha, IFJ President. “The IFJ stands fully behind our affiliates in Macedonia who organized journalists’ protests this morning outside the court house.”

Kezarovksi, an investigative journalist at the daily Nova Makedonija, has been in detention and then under house arrest since 28 May 2013 for an article he wrote in 2008 for Reporter 92 magazine. The Court of appeal cut the original sentence to two years but confirmed the original guilty verdict. Kezarovski has been under house arrest awaiting for the outcome of the legal procedure. He is now expected to be imprisoned again for several more months.

The Association of Journalists of Macedonia (ZNM) accused the courts of making political calculations when they should have instead freed an innocent journalist.

“The only fair decision by the Court of Appeal in Skopje was to dismiss all charges. Instead of taking into account the rights of an innocent journalist who revealed abuse in the work of public institutions, it has decided to protect those who thought two years ago, that the imprisonment of a journalist in Macedonia could easily pass,” said Naser Selmani, ZNM President.

“He just did his job. He should never have been imprisoned for the charges against him. This decision is a real shame for the country”, said the president of the EFJ, Mogens Blicher Bjerregård. “Today’s excessive verdict sends a message of censorship to other journalists in the country. Elsewhere in Europe, journalists are allowed to carry out investigative reporting of issues in the public interest free from the threat of imprisonment. We will strongly report this case to the intergovernmental organisations dealing with Media Freedom.”

The IFJ and the EFJ together called on the Macedonian authorities to uphold the democratic values and ensure that there will be an independent review of his case, including the decision to charge him and his right to a fair trial, which must consider the overturning the guilty verdict. The IFJ and the EFJ finally urged them to compensate the journalist for the damages he has endured during the whole process.

At the end of the Skopje’s demonstration some white balloons symbolizing freedom were released to support the journalist’s cause.