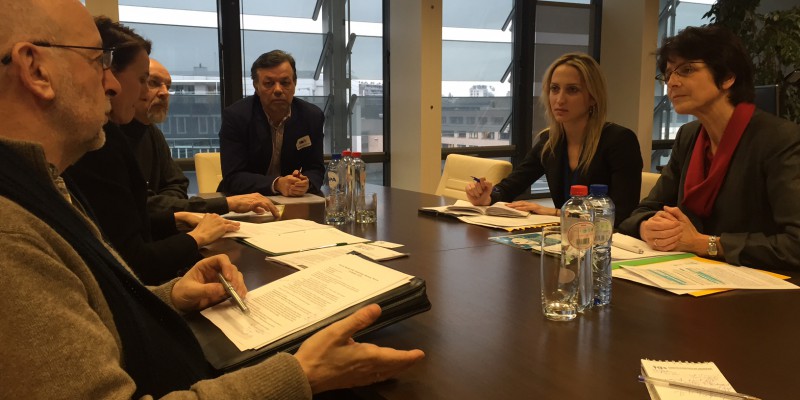 
Marianne Thyssen, EU Commissioner for Employment, Social Affairs, Skills and Labour Mobility told a delegation of the European Federation of Journalists (EFJ) on 30 January that the European Commission is taking action to better prevent and deter undeclared work and bogus self-employment which contradicts EU labour standards.

The EFJ raised concerns over the complete deregulation of economic and social labour relations in journalism leading to a new precarious workforce who cannot earn a living from journalism. To give concrete examples of the situation, the EFJ delegation gave copies of  recent EFJ reports on Confronting Austerity : Financial and Employment Models in Journalism and Precarious situation of freelance journalists in Europe.

“What you describe here can be interpreted as ‘undeclared work’.  A bogus self-employed person is not in line with EU labour standards. National labour and social security authorities should take actions to prevent this,” said Commissioner Thyssen. In this respect, the Commissioner stressed that “there is clearly a need to assess and understand potential forms of bogus self-employment better, and we shall work to gather further evidence at EU level”.

She referred to a Commission proposal that will establish a European platform to combat undeclared work.  The platform, which the Council and Parliament are currently discussing, seeks to bring together various national enforcement bodies involved in the fight against undeclared work, which causes serious damage to working conditions, fair competition and public budgets. The development in the media and in other sectors has led to an increase in “dependent self-employment” or “dependent outsourcing”. Commissioner Thyssen underlined that “cooperation among Member States in this area can make a difference. I am confident that the proposed European platform to fight undeclared work should help to prevent abuse of self-employment status more effectively at EU and national level”.

The EFJ highlighted a recent preliminary court ruling by the European Court of Justice  (FNV Kunsten Informatie en Media v. Staat der Nederlanden) which deals with the conditions for trade unions to be able to negotiate on behalf of freelances or self-employed. The European Commission is currently studying the said ECJ ruling vis-à-vis previous rulings.

Referring to an earlier European Parliament resolution on atypical workers, which confirms the need of a “set of core rights for all employees regardless of their employment status” and decent social protection schemes for all, the Commissioner informed the EFJ delegation that the Commission is planning to work on a green paper on atypical work forms, aiming, inter alia, at resolving loopholes of employment legislation in order to reduce labour market segmentation and enhance transparency in labour.

Welcoming Thyssen’s attempt to fight against inequality and to ensure decent and safe working conditions and equal opportunities for all, the EFJ insisted on the need for more political will to reflect the EU’s objectives of a social Europe. In this context, the EFJ stressed the lack of Social Dialogue at European level in the print sector as well as in Central and Eastern Europe .

“My position is shared by President Juncker and many others in the Commission that a healthy society needs social fairness,” stressed Commissioner Thyssen  and offered her cooperation in addressing the important issues outlined by the EFJ.

The EFJ also raised concern on the ongoing TTIP negotiations with the USA and its possible negative impact for the European media industry. “Even if social standards are not part of the TTIP negotiations, a team of DG Employment is involved in the talks to monitor any possible direct or indirect consequences,” said Commissioner Thyssen.

The EFJ  thanked Commissioner Thyssen for her participation to the protest in Paris following the terrorist attacks at Charlie Hebdo.  “After this criminal attack, the French and European public turned massively to ‘established’ media, to be informed on what was really happening,” said the EFJ delegation.