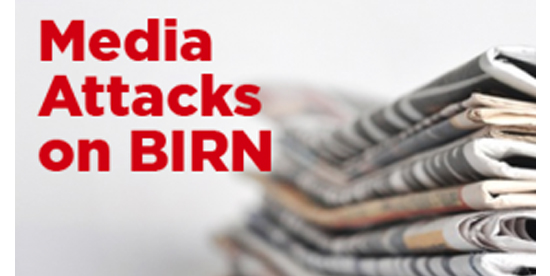 
The European Federation of Journalists (EFJ) has today received an official complaint drafted by the Balkan Investigative Reporting Network (BIRN) which draws the attention to alarming developments in Serbia. According to the network, the Serbian Prime Minister, some media that support his administration and other high-ranking government officials are conducting unprecedented attacks against critical voices.

After a series of investigations on issues of public interest, the Serbian authorities and pro-governmental media organisations started a public campaign against BIRN journalists labelling them as “EU mercenaries, spies and liars” or people working against Serbian national interests.

“We are alarmed and particularly concerned by what appears to be a clearly deteriorating situation of media freedom in Serbia. In democracies, one should expect journalists to act as watchdogs of all public bodies (including the government) enabling the people to make informed decisions on the issues of public interests. The colleagues from BIRN deserve to be supported and protected by the Serbian and the international community for their intensive investigative reporting,” said Ricardo Gutierrez, EFJ General Secretary.

The BIRN journalists are not the only target in this Serbian “hate campaign” against critical voices. “Other organizations and independent institutions, like the Humanitarian Law Centre and the Serbian ombudsman have also come under fire, with almost identical ammunition, labeling them traitors, mercenaries, etc, which points to a worrying pattern and sends a clear message to any critical voices about what lies ahead”, reports BIRN.

BIRN regrets that “the international community’s approach to the region appears to prioritise stability at the expense of democratic freedoms. In Serbia’s case, as long as the country is cooperating with the EU-led dialogue with Kosovo, there is a silence regarding other worrying developments”.

The EFJ calls the international community to pay more attention on the status of media freedom and freedom of expression in Serbia.

Jug Grizelj, the national prestigious award for highest achievements in investigative journalism, has been unanimously attributed this year to BIRN journalists by NUNS (Independent Journalists’ Association of Serbia), an EFJ affiliate.