World Press Freedom Day in Riga and Brussels, 3 May 2015

UNESCO leads the worldwide celebration co-hosted by UNESCO and the Government of Latvia, in Riga, from 2-4 May 2015.

As official partners of the event, the IFJ and the EFJ will organise on 3 May (14:00-15:30) a panel discussion at the National Library, on “Regulation, Sustainable Self-regulation and Professional Standards” (speakers: Mr Jim Boumelha, President of the IFJ, Mr Mogens Blicher Bjerregård, President of the EFJ, Mr Younes Mjahed, President of the Moroccan Syndicate of Journalists, Ms Dominique Pradalié, Deputy General Secretary of the Syndicat national des journalistes français, Ms Anda Rožukalne, Chairman of the Latvian Association of Journalists, Mr Nimok Leksono, Representative of Press Council of Indonesia). 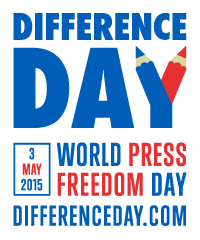 The IFJ and the EFJ will also participate in the “Difference Day” organised in the BOZAR Centre for Fine Arts, on 3 May from 14:00 to 21:00, by the Brussels Platform for Journalism,  a joint academic initiative of Vrije Universiteit Brussel (VUB), Université Libre de Bruxelles (ULB) and Erasmushogeschool Brussel (EHB) under the umbrella of the Brussels University Alliance.

Together with BOZAR, the Platform is partnering with journalistic, media and academic organisations including the IFJ and EFJ, as well as European and global institutions and foundations to organise the European Gala Night for freedom of expression in Brussels on 3 May. The Gala Night will present three awards: The Golden Pen Freedom Award, the Press for More European Innovation in Journalism Award and the VUB/ULB Honorary Doctorate for Critical and Constructive Contributions to Freedom of Expression.

The European Federation of Journalists (EFJ) has joined the Brussels Platform for Journalism and iMinds, a Brussels-based digital research institute, to launch the Press for More Award meriting entrepreneurial and innovative ways of doing journalism. The winner of the award will be announced during the “Difference Day” event.