Verhofstadt: “EU Progress Report does not say much about press freedom”


“The annual Progress Reports produced by the European Commission does not say much about the situation of press freedom and freedom of expression in the candidate countries. Therefore, I call the Commission to better focus on those topics as we need a deeper analysis and development on those important topics, specially regarding the situation in Turkey”, said Guy Verhofstadt, member of the European Parliament and leader of the Group of the Alliance of Liberals and Democrats for Europe of (ALDE) , during a seminar on Press Freedom in Turkey co-organized on 22/04/2015 by ALDE and the Greens. 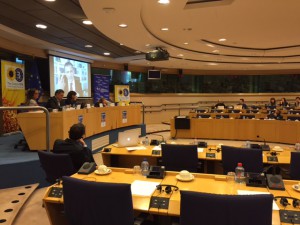 The liberal MEP’s call to the Commission to elaborate about the press freedom chapters for the upcoming Progress Report was followed by several hard criticisms against the Turkish authorities for their handling of journalists rights and freedom of expression in the country. “President Erdogan and his AKP have not lived up to the initial promise of delivering a modern, democratic and tolerant Turkish society, based on the rule of law. The initial gains in ending the political influence of the Turkish military and state administration have been replaced by authoritarian tendencies and security laws, by intolerance towards criticisms and lack of self-reflection. We need to increase EU support, in very practical terms, to the media and journalists, both in the candidate countries and in the neighbouring ones, to secure that Turkey and other applicant countries are respecting the democratic principles. The EU should set up an ambitious exchange programme for journalists – to secure higher standards but also to support their self-confidence to stand up against undue pressure and to remain strong on the front-line for free speech. Moreover, I’m asking myself a lot of questions regarding the EU-Turkey relations because it’s clear that Erdogan’s New Turkey seems to be no more interested in the European Union. What needs to be done by the EU or have we done something wrong in the recent years ?”, asked Guy Verhofstadt.

Attending the seminar, the European Federation of Journalists (EFJ) has sent its provisional inputs on press freedom issues to the EU delegation of Turkey for consideration for the upcoming Progress Report 2015 to be issued in October.

Istanbul based US journalist Andrew Finkel, founder of P24 for independent journalism in Turkey, shared his thoughts about the fate of journalism in Turkey. “The 1990’s is regularly considered as the golden age of the Turkish press and the banking sector with the emergence of big private media corporations led by former journalists or bank managers. The collapse of this corrupt system happened in 2001 and today we have media owners with no interest in making money from journalism or promoting independent journalism because they are only buying newspapers to gain political influence in order to get new contracts through public procurements. It’s hard to convince the Turkish authorities about the importance of independent journalism, so we should convince the citizens and give them an incentive to support free media and quality journalism because defending journalism is the key to get better schools, better employment conditions, more transparency, etc.”

Ekrem Dumanli, editor-in-chief of the daily Zaman, was not authorized by the Turkish authorities to travel to Brussels to attend the seminar but he was able to testify from Istanbul through a video-conference. Dumanli explained how he was briefly arrested in December 2014 because of two columns and one article written by others and published by his newspaper. “My colleague Hidayet Karaca from Samanyolu TV is still held in jail for fictional soap series broadcasted by his channel. People should know that the situation for journalists is bad with job threats, black listing, twitter prosecutions, censorship and refusals of accreditations”, said Dumanli showing at recent example of accreditation refusal for IHA news correspondent in Ankara.

MEP Marietje Schaake added that “Press freedom has been restricted by the Turkish government in a systematic manner. The country should overcome its obsession of a permanent coup d’Etat to justify its crackdown on the media. Imprisoning journalists, censorship of social media, reporting bans, tax fines on media companies and personal attacks by politicians against editors and columnists have a severely chilling effect on free speech and media freedom. Turkey is no more respecting the Copenhagen criteria to access the EU. It is time for the EU to step up its efforts to train journalists, through exchanges in Europe. We should also do something to improve the EU image in Turkey and the challenge is big since there is no media covering the EU news in Turkish.”