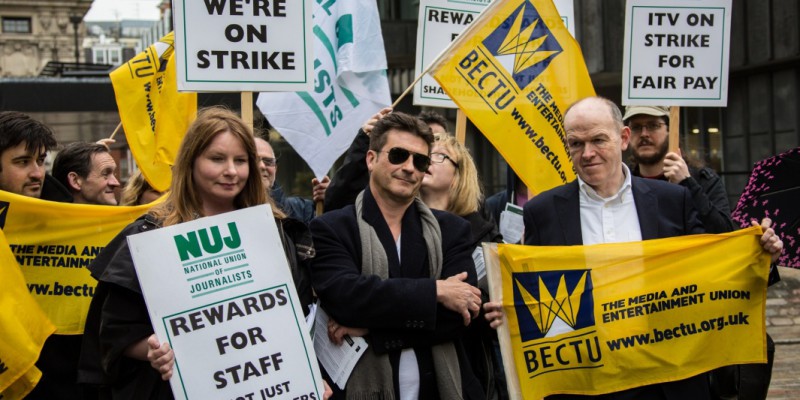 
Journalists working for the British broadcaster, ITV, staged a 24-hour strike on 14 May calling for fair pay. The National Union of Journalists (NUJ), a member of the European Federation of Journalists (EFJ) in the UK led the industrial action together with the technicians’ union (BECTU) to demonstrate outside ITV studios across the countries.

The dispute is in response to a 2% pay offer from the company. ITV journalists were not satisfied with the rise when the company has recorded a rise in profit of 39% after tax in 2014.

Michelle Stanistreet, NUJ general secretary, “The company’s success is down to a team effort. Staff have stuck by the company during the difficult times, but it is unfair and insulting that when profits are soaring and the company is bullish about its financial future success, executives at the top are trousering huge amounts of cash while refusing to pay staff fairly.”

ITV has acknowledged to the unions that their workers’ pay is at least 4% behind the cost of living and the current offer does not bring the workforce in line with the cost of living increases over the past 10 years. In addition, there is a huge disparity between the pay offered to staff and the bonus package to executives.

The EFJ supports the strike action held by the NUJ and ITV journalists and their demand for a fair share of the profits made by the collective efforts. For more information or send your message of solidarity, please visit the NUJ campaign page https://www.nuj.org.uk/news/itv-on-strike-today/ and #ITVstrike on Twitter.