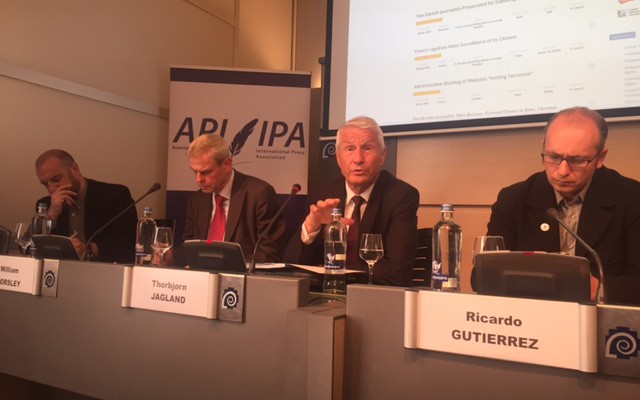 Prior to the press conference on the CoE platform to strengthen the protection of journalism and journalists’ safety on Tuesday 19 May, Jagland participated in a meeting at the headquarters of the IFJ and the EFJ in Brussels with the other partners (Reporter Without Borders – RSF, Article 19, Association of European Journalists -AEJ).

Speaking in the conference, Jagland highlighted the new threat of mass surveillance in the CoE zone. In the past six weeks since the launch of the online platform, the IFJ and the EFJ have submitted 39 cases of media violations. The cases submitted concern violations of journalists’ rights in Turkey (12 cases), Azerbaijan (7 cases), Russia (6 cases) and Ukraine (5 cases), France (3 cases), Spain (2 cases), Macedonia (2 cases), Slovenia (1 case) and Luxembourg (1 case).

Jagland said, “I am pleased to see some governments, such as France, Denmark or Slovenia, responding to alerts posted on the Platform. It is time now to go beyond that and to establish a dialogue, where possible, in order to improve the situation of journalists on the ground. We all agree: words must lead to action!”

@TJagland:Platform for journalists safety should not become a ritual for submissions, we should seriously follow-up pic.twitter.com/cgXmkEtAJb

Anthony Bellanger, IFJ Deputy General Secretary of the IFJ said,“In Europe, journalists are facing double jeopardy. They are paying the price of economic crisis in the media for years, especially young journalists. They are often the victims of intimidation, physical violence or even imprisonment. Their only crime is to have fulfilled their mission to inform the public as journalists. The IFJ signed the Memorandum of Understanding in Paris in December for launching the online platform. It is a first response because it directly challenges governments and politicians. Some states have already responded. We welcome this. But what about the others? What are the tools that the CoE proposes today to ensure an efficient follow-up of the cases submitted online?”

Ricardo Gutiérrez, the EFJ General Secretary reminded that 29 journalists remain behind bars in Europe (21 in Turkey, 7 in Azerbaijan and 1 in Russia). Gutiérrez said, “Apart from these serious cases, there are many situations where journalists are no longer able to perform their work due to the deteriorating working conditions. There is no press freedom without decent working conditions for journalists.

Thank u @IFJGlobal @article19org @EFJEUROPE @aej_int Great to be working with you on #mediafreedom. We all agree: words must lead to action!