The invisible hand of self-censorship in Serbia 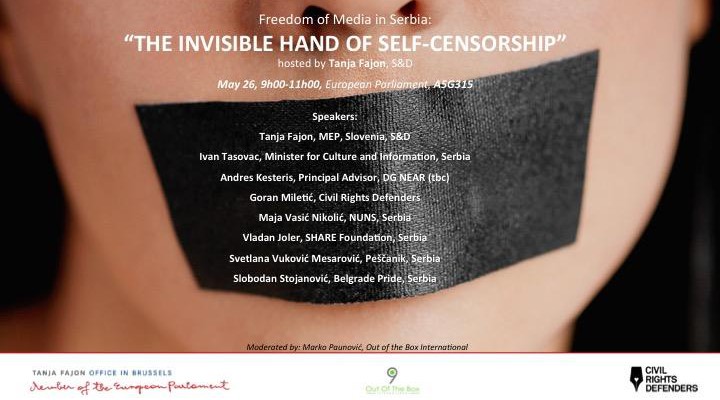 
A round-table on media freedom in Serbia discussed at the European Parliament the dramatically worsening media crisis in Serbia. Maja Vasic Nikolic representing EFJ affiliate NUNS outlined the atmosphere of impunity towards attacks on journalists in Serbia. Only for 2015 14 threats against journalists are recorded so far. “As long as the Serbian government sees media as a tool for achieving short term political goals, and not as a fourth power, not much will change”, said Nicolic and pleaded for transparency in ownership, freedom of expression and journalism in the public interest.

Sletlana Mesarovic from the online news portal Pescanik referred to the lack of information content in online media, as cyber-attacks against independent journalists, bloggers and citizens are daily routines used by the government. Mesarovic urged that online environment must be protected as a priority in Serbia. There is a need to educate government and journalists to make sure that surveillance is not taking place.

Tanja Fajon (Member of the European Parliament) called on the Serbian government to take the media reform process seriously and stop intimidating journalists. Many participants found a pity that invited Serbian Minister for Culture and Information, Ivan Tasovac, was not present at the meeting.

Other speakers included MEPs from Slovenia, representatives from the Share Foundation on the importance of Internet freedom, Belgrade Pride on how to fight homophobia and how to protect human rights defenders in Serbia, the European Commission, DG Near on a new approach to the yearly progress reports and representatives of the European Federation of Journalists. In 2014 the strength of journalists’ unions, security of contracts shall be included in the progress reports.