“It’s dangerous to have your own opinions in Macedonia” 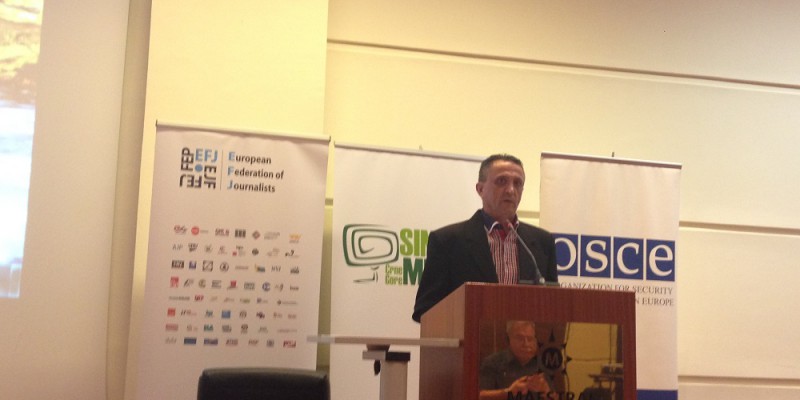 
Tomislav Kezarovski, the investigative journalist at the daily Nova Makedonija, had been in detention and then under house arrest since 28 May 2013 for an article he wrote in 2008 for Reporter 92 magazine in which he allegedly revealed the identity of a witness in a murder case. Kezarovski was invited to speak in the Annual Meeting of the European Federation of Journalists (EFJ) held in Budva, Montenegro on 2 June. In his speech, Kezarovski highlighted the challenges he and his fellow colleagues face in Macedonia as journalists. He also thanked the EFJ and the journalist community in Europe for their solidarity during his struggle for freedom.

The EFJ Annual Meeting issued a statement to express its continous support to journalist like Kezarovski and journalists’ unions in the Balkan region to defend the labour rights of journalists and media freedom.

You can read the moving and inspiring speech of Kezarovski below.

Dear Mr. Mogens, Mr. Ricardo, Mrs. Renate, other members of the staff and the Steering Committee of European Federation of Journalists (EFJ).

Dear colleagues, journalists from many other countries of the continent and beyond, who are members of the EFJ and IFJ,

I want to express my utmost and sincere gratitude for the support that you have given me and my family.

In Macedonia, it is dangerous if you have your own opinion. Thus, silence is the most common form of opinion. Courage is necessary for a journalist. The courage to think differently, and to say it loudly and clearly what is true, can be penalised in different ways. There are different ways to silence someone in Macedonia. The easiest way is a court fine.

Writing and reporting in the name of truth in Macedonia can trade away your freedom. You can be arrested and put in prison. Unfortunately, both of these possiblities happened to me.

I was tried at first at the Criminal Court, then at the Court of Appeal in Skopje, Macedonia, a country which will put you behind bars because of what you write as journalists.

This was not just a punishment given by the court for myself. It was a punishment for the entire journalism community, our freedom and democracy as a country.

The irregularities in the trial process convinced many people that it was a tactic to intimidate journalist like me who dare to have an opinion. My case revealed a much bigger problem in my country and its judicial problem. The article I published about the scandalous investigation for the death of journalist Nikola Mladenov, will probably be a very different trial if Macedonia respects the rule of law. Despite this, I think it is worth to wait for this to happen.

Dear colleagues, I feel strong despite everything that had happened to me. And I have to be strong, for myself and my family, for my friends and colleagues and for all those, who one way or another, supported me.

I remain resilient and I feel proud and joyful. Because it feels good to make it through, but it is even better to see the disappointment in the eyes of those who wished for you to fail.

I must admit that the pressure on me is still there but I will survive this too. I will keep on defending myself and my family in my own way. Recently, I received written threats on my door steps. But I will say it again that they are: “knocking at the wrong door.”

History consists of defeats and victories. Now, I am defeated. But I will not wait long until I win. I am sure about this. Because the secret will never remain secret. Sooner or later the truth will be revealed.

Finally, I want to ask you in my name to convey greetings to all colleagues who are working on investigative journalism. As I say,The truth will always be my guide for my reporting. I encourage them not to give up from telling the truth and not to fall under pressure. The should have no fear in doing their job with dignity journalists.