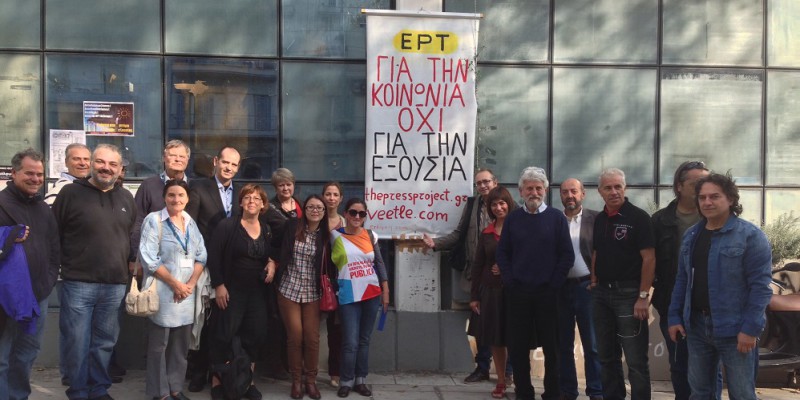 
The European Federation of Journalists (EFJ) has welcomed the reopening of the Greek public service broadcaster, ERT on 11 June, the same date it was shut down two years ago in 2013 leaving 2600 people out of work.

According to recent announcements made by the government, former ERT workers will be able to return to their jobs (except those who retired voluntarily at the time of the closure). It is estimated that around 1500 media workers will be rehired. However, it is not completely clear yet on what terms and conditions these workers will be hired.

Marilena Katsimis, former General Secretary of JUADN, is among the journalists who are rehired. Katsimis will be hosting the ERT morning programme today. “I am very happy that we can finally see the reopening of ERT. I would like to thank the journalist community across Europe for their support and solidarity during a very difficult time.”

The EFJ congratulated its affiliates in Greece (JUADN, ESIEMTH, PFJU and ESPIT) who have been resilient in fighting for the reopening of ERT and the rights of journalists since the closure.

Mogens Blicher Bjerregård, the EFJ President said, “It has been a long and tough battle for our affiliates and journalists in Greece. Their courage and resilience should be commended especially for those journalists who continue to do their jobs in order to provide information to the public after the closure.”

“However, the management should be reminded that they have the obligation to ensure decent working conditions for journalists and editorial independence in its programming,” added Blicher Bjerregård.

While the journalists’ unions in Greece welcomed the reopening of ERT, they remain in dialogues with the new management in order to ensure that the rights of journalists are respected.

The development at ERT has taken a dramatic turn. On 11 June 2013, ERT was close down abruptly and replaced by a new body called NERIT. The election of a new government led by Prime Minister Alexis Tsipras promised the return of ERT. In April, the Greek parliament enacted a legislation to reopen ERT. The parliament recently appointed the new executive board consisting of representatives of media workers and a temporary manager.

A celebration ceremony will be held today at 11 am in Athens today in Athens, outside the ERT premises.

The EFJ and its Broadcasting Expert Group and affiliates in Europe, including the Finish Journalists’ Union and the Norwegian Journalists’ Union, congratulated the affiliates in Greece and ERT colleagues. The EFJ Annual Meeting (which was attend by around 90 delegates) on 2 June in Budva voted a statement on public service broadcasting and congratulates Greece, its people and its government on the reopening of ERT.

You can put your congratulations messages in the comment box below.