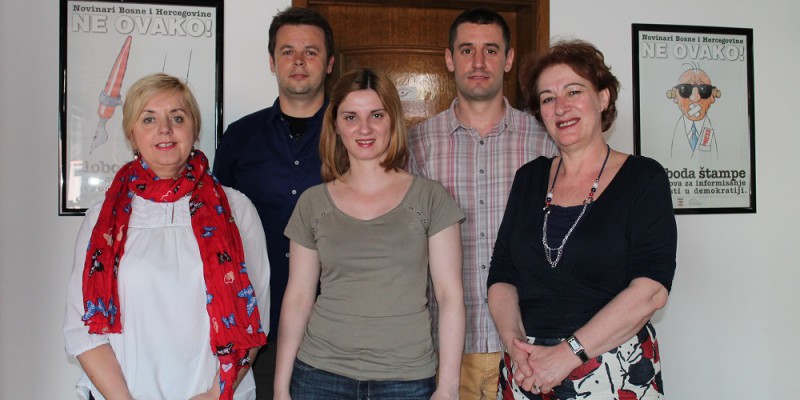 This month, the European Federation of Journalists (EFJ) has welcomed its new member from Bosnia and Herzegovina, the the Bosnia-Herzegovina Journalists’ Association (BHJA). In this feature article, the EFJ has interviewed Borka Rudic, General Secretary of the association to tell us the challenges facing journalists and the union.

The BHJA was founded in 2004 as an umbrella association of journalists in Bosnia-Herzegovina with activities covering the entire territory of the country. It has 750 members from all sectors of the media and all types of journalists and media workers (including freelance journalists, journalism students, photograhers, proofreaders, cameramen). The association is led by General Secretary, Borka Rudic and President, Milkica Milojevic with a team of six staff (See headline picture) in Sarajevo.

What are the major challenge facing journalists and your union?

The media community in Bosnia and Herzegovina is facing various issues affecting the country’s democratic development. Bosnia and Herzegovina is ranked 66th of 180 countries in the 2015 World Press Freedom Index. Almost 20 years after the peace agreement was verified, various actors and institutions, mostly from the civil society, continue to face the struggle in multiple fronts. Political influence causes serious damage to the media community.

This damage is shown, for instance, the ineffective rule of law which manifested as impunity for crimes against journalists. In the last 8 years, there were 400 cases of media violations, among them 60 were considered as criminal offenses against journalists. These offences include cases of death threats (17 cases), physical assaults, arrest and censorship. Only 9 cases were brought to the court for ruling. Among them, only two cases were treated as criminal charges and others as offences.

The ineffectiveness of rule of law is clearly shown in the high number of lawsuits against journalists and media organisations for criminal defamation. Numerous complaints (around 100 cases per year) are usually launched by politicians and other public officials. Bosnian judicial system does not comply with the EU standards when it comes to media freedom. The lack of compliance with European standards on media freedom and freedom of expression results in a high number of cases resolved in favour of politicians and officials.

Another challenge for the media community is the existence of the public service broadcasters (PSB) and the legitimacy of the main states regulatory institution (CRA). Both issues are believed to be caused by particular political interests. In the first case, several MPs boycotted the broadcasting fee as the main financial source for the PSB and the constitution of the Council of CRA is being changed is a way that is legally questionable.

With the above challenges and trends, they contribute to the lack of media independence, the frequent violations of journalist’s rights and freedom of expression, leading to a degraded profession. Political interference has divided the media community and made the work of trade unions impossible.

Journalists often work under economic and political pressures. Their participation in the unions made their work more precarious. It is estimated that about 40% of media employees in a precarious relationship with their employer, and that they do not have permanent contracts nor paid taxes and other contributions.

What are your priorities for the next years? And what is your major work for the moment?

The priority for BHJA in the next years is advocating the Law on Media Ownership Transparency and the Law on Advertising in the Media as they are relevant for the decrease of the real issue of political interference and increase of media objectivity, freedom and fair market conditions.

A lot of work is planned to serve the institutional and capacity needs of the Association. One of the priorities is also to keep the level of support to the Journalists’ Clubs, which serves as the official affiliates in cities across Bosnia. These clubs proved to be a significant tool for union to protect and serve journalists at local level. They also help promote solidarity among journalists through various gatherings and meetings. Journalists in these meetings exchanged ideas to defend media freedom and journalists rights.

One of the BHJA projects is to improve the implemetation of EU standardards on defamation cases by national judicary bodies. BHJA will organise workshops and discussion among editors, media owners, lawyers and judges that aim to improve the knowledge and awareness of national lawyers and attorneys on media issues throuh the project financed by Civil Rights Defenders.

Meanwhile, the BHJA is conducting a bi-monthly monitoring on the state of PSB.

Our on-going activities are organising educational workshops for jorunalists, editors and students of journalism through the “Novinarska akademija“ (Journalist´s Academy) project and various in-house trainings.

This year, we are participating in a regional project called Media Circle (Fairpress). The goal is to establish a sustainable mechanism to monitor media ownership and advocacy of favourable media laws to ensure media independence.

What do you hope to develop or cooperate with the EFJ and its affiliates by joining the EFJ? In another word, what can the EFJ do to support or help your union become stronger?

We hope to develop a stonger legitimacy of BHJA through the EFJ membership and strenghten our legal support to members. We also hope that the BHJA will get the support of EFJ to advocate the adoption of favourable media laws that are compatible and corespondent to European standards, and support issues that are affecting the media community, jorunalists pressional rights, freedom of expression in my country.