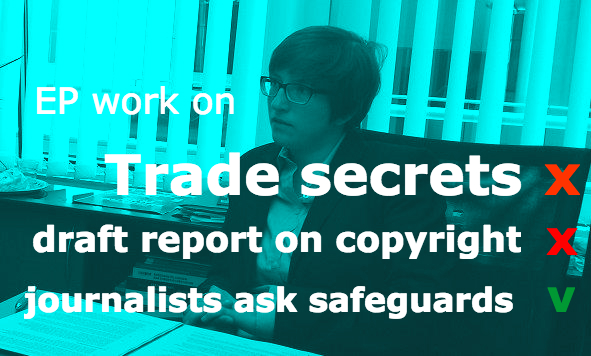 
An IFJ/EFJ delegation met with Pirate Party MEP Julia Reda this morning to discuss her report on the implementation of the “infosoc” directive on copyright and related rights in the information society and the directive on trade secrets for which she was appointed as shadow rapporteur for the Greens EP group.

The IFJ and the EFJ expressed its strong rejection of the trade secret directive. “You were right to vote against the current version of the text,” Ricardo Gutierrez told the MEP. Julia Reda expressed concerns over the burden of proof placed on journalists. In the current version of the directive, journalists may only “reveal” a “misconduct, wrongdoing, fraud or illegal activity” “provided” that they “acted in the public interest”, which can only be determined by a judge, and therefore does not protect them against court cases for trade secrecy violation. According to the EFJ and the IFJ, journalists remain exposed to intimidation and judicial harassment.

The European Parliament will now engage in trialogue negotiations with the EU Council and the Commission to agree on the final text. The EFJ will continue to campaign to revise the #TradeSecrets directive. Our call is only one among many. For instance more than 350,000 citizens signed a petition launched on 4 June by journalist Elise Lucet.

The IFJ and the EFJ welcomed improvements brought to Ms Reda’s report following the vote held in the Legal affairs committee on 16th June. The organisations pointed to positive clauses strengthening the contractual position of authors but deplored the latest amendment calling on freedom of contracts that would strongly undermine the position of authors by allowing unfair contractual clauses to be used against authors.