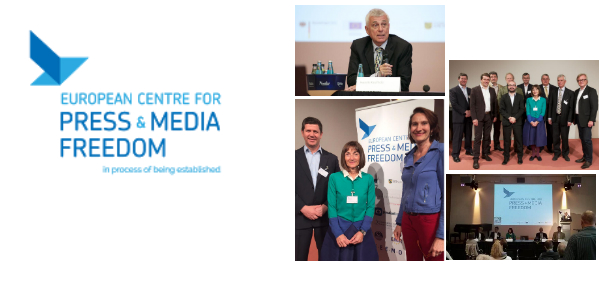 
Representative from 20 journalists’ organisations, publishing houses, academic institutions, trade unions and media experts from many European countries have launched the European Center for Press and Media Freedom (ECPMF) in Leipzig, Germany. The European Federation of Journalists (EFJ) is among the founding members of the ECPMF. Mogens Blicher Bjerregård (EFJ President) and Liljana Smaijlovic (UNS President, Serbian Journalists’ Union) have been elected to the 8-member Executive Board,  Naser Selmani (President of the Journalists’ Association  of Macedonia) was elected into the Supervisory Board.

The ECPMF is an independent non-profit European Co-operative Society (SCE). Its missions are to unite Europe’s highly fragmented media freedom community and to address media freedom violations in Europe. The aim of the Center is to mobilise support for journalists  facing political and economic pressure and to act as a major contact and information point for media freedom in Europe.

For a year, the ECPMF is financially supported by the European Commission, the Media Foundation of Sparkasse Leipzig, the City of Leipzig, the German Foreign Ministry and the State Chancellery of Saxony. Project partners include Journalismfund.eu, the Institute of European Media Law (EMR), Ossigeno per l’informaziione, Osservatorio Balcani e Caucaso and the South East Europe Media Organisation (SEEMO).