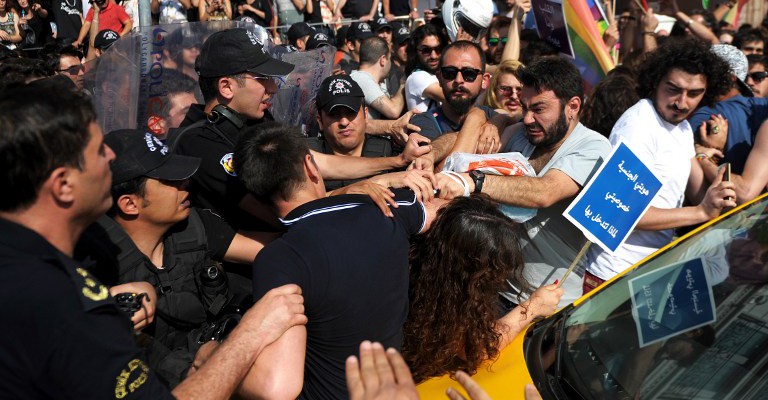 
On Sunday (28/06/2015), the police in Istanbul used tear gas and water cannon to disperse  LGBTi Pride Parade peaceful participants before even the beginning of the demonstration. Journalists and press photographers have prevented by the police from doing their job.

The 13th edition of the Istanbul LGBTi Pride Parade was authorised and scheduled to start on Sunday at 5 pm at Taksim Square but the demonstration had “suddenly been banned by the Istanbul Governor’s Office using the month of Ramadan as the reason without any announcement”, according to the Istanbul LGBTI Pride Week Committee.

Tear gas, water cannon and rubber bullets have been used against LGBTi (Lesbian, gay, bisexual, transgender and intersex) activists. Journalists and press photographers were also targeted in order to prevent them from reporting the use of violence against the people.

Çiçek Tahaoğlu (Bianet journalist) and Yıldız Tar (editor at KAOS GL magazine) have been attacked and threatened by police officers when they were filming the arrest of young trade unionists. An unidentified press photographer has been hit at the eye while covering the events.

“Turkish authorities must start an investigation against police officers who used physical violence and threats against media professionals”, said Journalists’ Union of Turkey (TGS). The European Federation of Journalists (EFJ) and the International Federation of Journalists (IFJ) strongly condemned the use of violence against peaceful LGBTI demonstrators and support its affiliate TGS in asking legal follow-up against police officers using violence against journalists and media workers.

The Council of Europe Commissioner for Human Rights, Nils Muižnieks, has just condemned the violence exerted by the police against the participants to the Istanbul Pride and has called the authorities to take measures to punish those responsible : “I am shocked and very disappointed about the police crackdown on the participants to the Istanbul Pride. The police should protect demonstrators, not attack them. The right to peaceful assembly is a fundamental human right that Turkey must better protect. I call on the authorities to identify those responsible for this violence and punish them. They should also send an unequivocal message that the right to peaceful assembly, including of LGBTI persons, will be upheld in the future.”