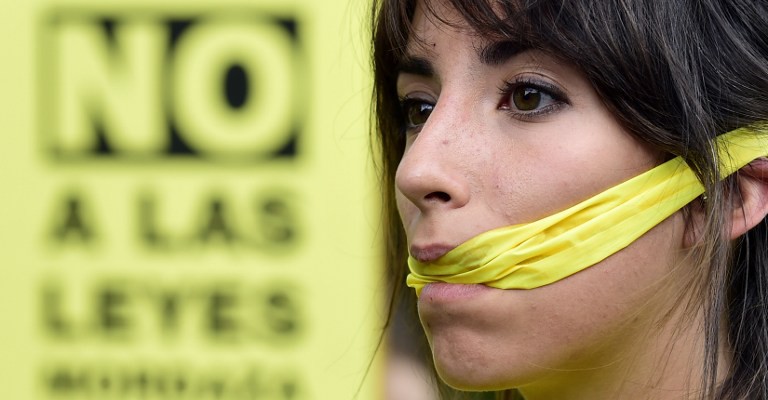 
Journalists and photographers will face a new wave of restrictions on their work as the Spanish government enacted the controversial public security law (also known as gag law or “Ley Mordaza” in Spanish) on 1 July, warned the International Federation of Journalists (IFJ) and the European Federation of Journalists (EFJ), who have joined their Spanish affiliates FAPE, FeSP, FSC-CC.OO. and ELA-Gizalan in calling for repeal of the law.

The Public Security Law makes a criminal offence “any unauthorised use of images or personal as well as professional data concerning police officers which may put at risk the safety of the officers or their families’.” Journalists or citizens who take pictures of police officers could face a fine of up to €30,000 under the new law.

The IFJ and EFJ back their Spanish affiliates’ opposition to part of the law, which prevents photojournalists from using footage of demonstrations featuring police officers.

“We support our Spanish affiliates’ opposition to the new law which seeks to censor journalists’ coverage of protests,” said IFJ President Jim Boumelha. “The new law makes a mockery of democracy in Spain by arbitrarily limiting the people’s right to assemble and by exposing photojournalists to prosecution for taking pictures featuring law enforcement agents at public events¨.

In June, the EFJ took part in an international press freedom mission to Spain which called for the law to be repealed because of negative impact on press freedom and freedom of expression.

According to EFJ President Mogens Blicher Bjerregård, “The Public Security Law clearly violates the fundamental rights of both journalists and citizens to freedom of expression and access to information as guaranteed by the EU Convention on Human Rights. We worry that more and more journalists and photographers, especially freelances, will face restrictions or arrests due to the new law.”

Journalists’ organisations in Spain denounced the motives for the new law, including the government’s effort to ban protests against budgets cuts. They fear that the approved text will affect mainly regional media and community media, thus severely undermining media diversity and pluralism in Spain.

Organisations, such as Green Peace, accused the government of denying people the right to expose excessive use of forces by security officers at protests. In the meanwhile, five UN Special Rapporteurs – on freedom of assembly, on promotion and protection of freedom of expression, on promotion and protection of human rights and fundamental freedom in the fight against terrorism, in human rights of migrants as well on the situation of human rights defenders – have issued a joint statement in February on legal reforms in Spain, urging national authorities to uphold their obligation to enforce civil liberties.

The IFJ and EFJ had already denounced the new law to the Council of Europe´s platform to promote the protection of journalism and safety of journalists. Read the alert here.