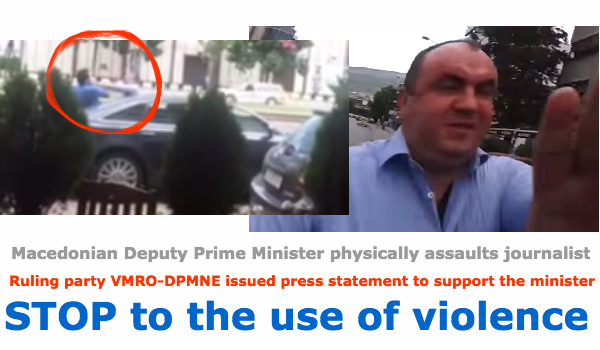 
The European Federation of Journalists (EFJ) and the Association of Journalists of Macedonia (AJM) strongly condemn the attack on journalist Sashe Ivanovski by the Deputy Prime Minister for Economic Affairs, Mr Vladimir Peshevski, on 15 July. The EFJ demands the Macedonian authorities to bring the attacker to justice.

Ivanovski is a journalist working for an online portal. According to media reports, Ivanovski was attacked while he was questioning Mr. Peshevski on a recent wiretapping scandal in Macedonia. The attack was recorded and widely reported in the media in Macedonia.

Following the attack, a civil campaign group called “Journalist Plenum” has called for a rally today to condemn the attack on Ivanovski and demanded that Mr. Pesevski shall resign from his post with immediate effect.

The AJM says, “We demand Mr Peshevski to submit immediately an irrevocable resignation because he is considered unfit for his position in the government following the attack.”

“We expect the state prosecutor Mr. Marko Zrvlevski to initiate immediately proceedings against Mr Peshevski for the attack on Ivanovski.”

According to the press statement issued by the office of the ruling party VMRO-DPMNE, it legitimized the attack on Ivanovski accusing him of harassing Mr Peshevski. It stated that “next time,  SDSM (the main opposition party) and its mercenaries such as Politiko (Sase Ivanovski’s nickname) and those similar to him should be aware of the consequences resulting from any threat to privacy, freedom and rights that every individual and entity has regardless of the position being held”.

Ivanovski’s case is not the first attack on journalists in Macedonia. On 21 April, prominent journalist, Borjan Jovanovski, received a death threat due to his critical reporting on the government. The EFJ will report immediately Ivanovski’s case to the Mapping Media Freedom project and Council of Europe’s Platform for the protection and the safety of journalists.

Photo Credit : Screenshots from YouTube videos published by the victim and witnessess