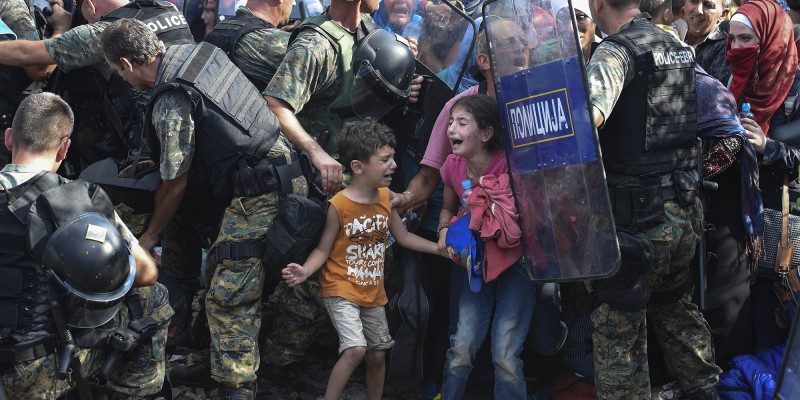 
“For the first time in my life I saw my colleagues – photographers and journalists – crying because of the situation”. Macedonian photographer Georgi Licovski, member of the Association of Journalists of Macedonia (AJM-ZNM), an EFJ affiliate, told TIME magazine he was moved, after spending the day taking pictures at the border from Greece to Macedonia, on Friday 21 August. He added that it was also the first time he has cried while working.

Hundreds of refugees trying to cross the border clashed with police lines, just a day after Macedonia closed the border.

Georgi Licovski said to TIME magazine there were a lot of babies, children and mothers in the crowd, and that many families were split up in the throng that pressed people to the ground. He added, “It was really terrible, really terrible.”

We contacted Georgi Licovski today. He told us: “I would like to add a few words, now that I am a bit calmed down… It’s the absolute truth that two colleague photographers, a journalist and I cried because of the terrible situation. As a professional journalist, I have to say that the policemen were doing their job, not letting anyone cross the border. The refugees were very disturbed after their long trip and 24 hours waiting for permission to enter Macedonia. They tried to break through the police cordon and the police tried to stop them. In that chaos, many of the refugees found themselves on the Macedonian side of the cordon where they realized that missing family members were left on the other side. The crying children were pressed by the refugees pushing into the police cordon. The children’s terrified faces caused our deep emotional response. I hope that our pictures will help the European politicians to become aware of this hard and complicated situation. No children in this world should suffer this kind of trauma.”

Thanks to Georgi Licovski and @epaphotos refugees get a face,it would help if we’d know their names, does anyone know pic.twitter.com/rs5XKVBDsP