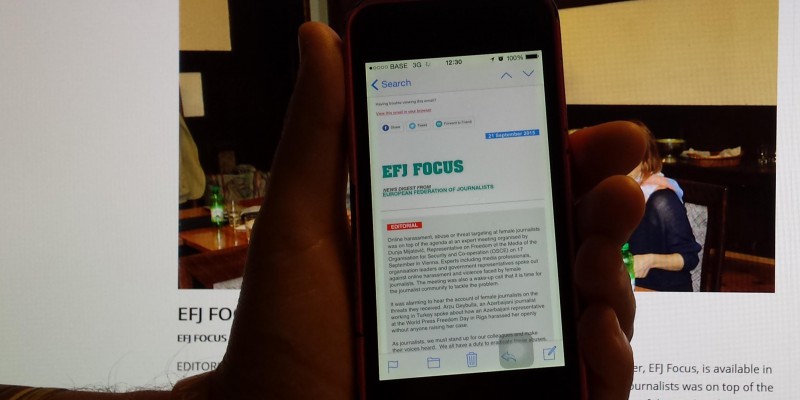 The EFJ newsletter, EFJ Focus, is available in English, French and German.

Online harassment, abuse or threat targeting at female journalists was on top of the agenda at an expert meeting organised by Dunja Mijatović, Representative on Freedom of the Media of the Organisation for Security and Co-operation (OSCE) on 17 September in Vienna. Experts including media professionals, organisation leaders and government representatives spoke out against online harassment and violence faced by female journalists. The meeting was also a wake-up call that it is time for the journalist community to tackle the problem.

It was alarming to hear the account of female journalists on the threats they received. Arzu Geybulla, an Azerbaijani journalist working in Turkey spoke about how an Azerbaijani representative at the World Press Freedom Day in Riga harassed her openly without anyone raising her case.

As journalists, we must stand up for our colleagues and make their voices heard. We all have a duty to eradicate these abuses. The EFJ will do its part by calling our members to promote regularly talks on harassment in the newsrooms and to develop a system of support in which victims can report cases of harassment. We must not isolate freelance journalists who need our support too.

These threats and harassment, whether online or offline, must be treated the same way. The perpetrators must be brought to justice to prevent future abuses. As echoed by one of the speakers: online abuse is not a problem of the Internet, it is a societal problem which shall be tackled broadly.