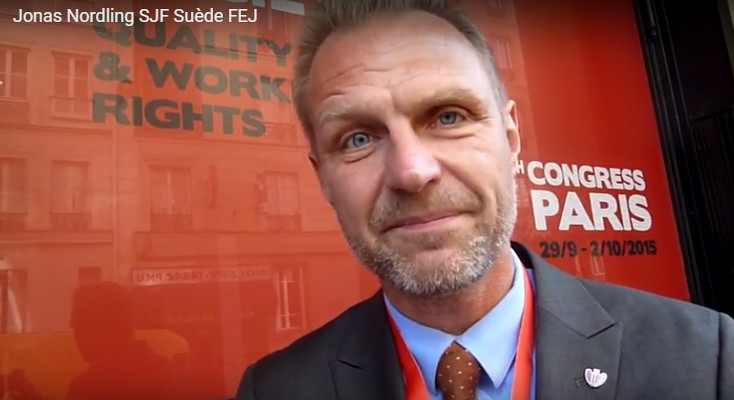 
The 13th Congress of the European Trade Union Confederation (ETUC) was held from 30 September to 2 October at the House of Mutuality in Paris. Five hundred delegates attended, discussed and voted some reports on the future of European workder and trade unions in the 39 countries covered by the ETUC. The delegation of the European Federation of Journalists (EFJ) consisting of three journalists Paco Audije (FAPE, FeSP), Patrick Kamenka (SNJ-CGT) and Jean-François Cullafroz (CFDT-Journalistes). But the Swedish delegation with fifteen members included an EFJ member, Jonas Nordling, president of the Union of Swedish Journalists (Svenska Journalistförbundet). Luca Visentini, the new General Secretary of the ETUC, dwells on the need to improve working conditions of independent journalists.

The discussion of the Congress focused on ways to counter unemployment, establishing common social standards to oppose social dumping by managers, facilitating refugees, migrants and foreign workers to combat racism and xenophobia, gender equality, strengthening of trade union organizations with young workers. The EFJ also shares some of the issues with workers represented in other sectors within the ETUC.

Among the ninety national trade union delegations and the European professional federations, the European Federation of Journalists was represented by three delegates Paco Audige (FAPE, FeSP), Jean -François Cullafroz (CFDT-Journalistes) and Patrick Kamenka (SNJ-CGT). They unanimously approved the ETUC policy manifesto. The EFJ delegation also presented three motions, including one on the Turkish and Kurdish workers situations that was approved by the 13th Congress.

Jonas Nordling, president of the Union of Swedish Journalists explained why it is important for journalistss unions to get involved in the 13th Congress of the European Trade Union Confederation.

Luca Visentini, the new Secretary General of the European Trade Union Confederation (ETUC), recognizes the action of the EFJ as an important part of the general activity of the ETUC.