Join us in Brussels today to say no to impunity #endimpunity 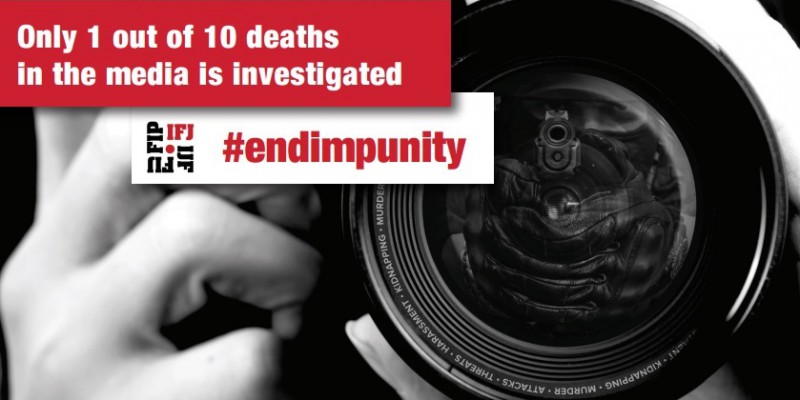 
The European Federation of Journalists (EFJ) has joined the IFJ #endimpunity campaign. We call on the European journalists and the EFJ partners to participate in the ceremony organised by the IFJ today, from 16:00 to 16:30, at the Residence Palace’s patio, in Brussels, in partnership with the Association Générale des Journalistes Professionnels de Belgique (AGJPB) and the United Nations.

2 November 2015 will mark the second commemoration of the killing in Kidal, Mali, of Ghislaine Dupont and Claude Verlon, RFI reporters. To date, the criminal investigation launched by French and Malian authorities has yet to identify the killers and bring them to justice.

According to IFJ statistics 118 journalists lost their lives when carrying out their duties in 2014. Today only one out of 10 killings in the media is investigated. The situation for non-fatal attacks on journalists is even worst. Governments fail in their duty to hunt down the harassers, the attackers, the killers of media workers.

Impunity not only endangers journalists, it imperils democracy and compromises hopes for peace and development.

In the frame of the International Day against Impunity, the International Federation of Journalists (IFJ) invites you to a special ceremony for the profession. The event will take place on Monday 2 November from 16:00 to 16:30 at the Residence Palace’s patio, 155, rue de la loi, 1040 Brussels.

The IFJ #endimpunity campaign 2015 will run from 2 to 23 November 2015. While the campaign is targeting all governments and de facto governments that have failed to investigate those crimes, the IFJ and its regional organisations, including the EFJ, are putting a specific emphasis on four countries: Mexico, the Philippines, Ukraine and Yemen.

In Ukraine, fifteen years after the body of  journalist Georgy Gongadze was found beheaded in the forest outside Kiev, Ukraine,  a recent report on the violations against journalists in the country records 8 killings, 125 intimidations, 322 assaults, 162 attempts of censorship and 196 cases of impeding activities since the beginning of 2014. If 54 investigations were launched, only three cases passed to court.