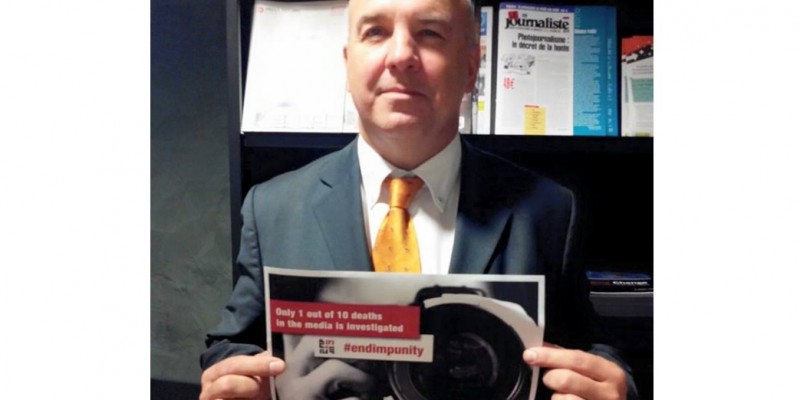 
The Council of Europe (CoE) Commissioner for Human rights Nils Muižnieks visited the International and European Federations of Journalists (IFJ and EFJ) on 3 November in Brussels to exchange on the threat of surveillance laws to press freedom in Europe.

The Commissioner said he has been assessing the impact of surveillance laws on journalism in Europe and wanted to consult the two journalists’ organisations over their members’ experience in this regard, especially the risk of self-censorship in media.

“I want to focus on stories of journalists whose work has been compromised because of surveillance laws and how it has affected journalism as a whole in order to make our case to governments over the issue,” Commissioner Muižnieks said.

EFJ General Secretary Gutiérrez briefed the Commissioner over the study being conducted by the University of Malta, working with the EFJ, RSF, INSI and Index Censorship over threats to press freedom in European media.

The study covers aspects in the profession which can lead to restrictions on media freedoms, including self-censorship. He spoke of the need to raise awareness among journalists of risks caused by surveillance laws.

“Journalists are not fully aware about the laws on surveillance and theirs dangers, nor is the public. Our role is to raise their awareness on this issue,” said Ricardo Gutiérrez. “Most journalists think it is part of their job to face pressure. We are telling them that it is not.”

The IFJ head of human rights Sagaga added that both IFJ and EFJ oppose surveillance laws which undermine journalists’ rights under the cloak of anti-terror measures in many European countries, citing cases from Germany and France.

The two organisations, which are partners of the Council of Europe on the Online Platform for the promotion of journalism and the safety of journalism, regularly submit alerts on the violations of journalists’ rights, some of whom are related to surveillance measures targeting journalists and their sources.

Commissioner Muižnieks pledged his support in the field of press freedom through such means such as visits and engaging governments over press freedom infringements, raise public awareness on the Council of Europe’s action in relevant countries, intervene as a third party in cases brought before the European Court of Human Rights.

Muižnieks recommended the federations to refer to CoE Ombudsmen within national human rights structures and parliamentarians of the CoE Assembly to increase pressure on governments infringing press freedom.