Media responsibility in the age of terror 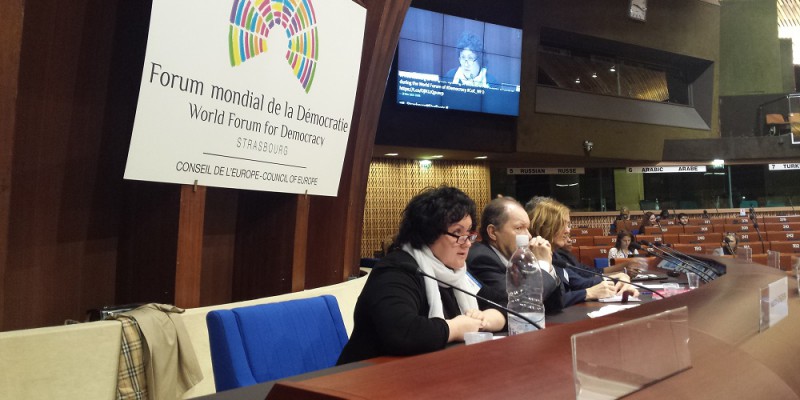 Nadezhda Azhgikhina is the Vice-President of the European Federation of Journalists (EFJ).

Mary Fitzgerald: Nadezhda, thank you so much for joining us. In your speech to the assembly you emphasised the difference between media and journalism, and talked about the traditional principles of journalism. Is the media business getting in the way of journalism? The principles of the owner of a media empire and those of a journalist can often be directly in conflict.

Nadezhda Azhgikhina: It is. It’s clear – I think everybody faces it. I was happy to attend several debates between all media players: association of owners, association of editors and association of advertisers… There was a special group of media devoted to entertainment, media scholars, top level writers and the journalists’ union.

They were discussing ethical issues, and asked, for example, whether it was ethical to use information that you got for money–something sexy about somebody. It was a very peaceful debate, no shouting. Not like in Russia — it was very Scandinavian, very respectful to one another with a moderator. They defined the act as immoral, and put it into their charter, their ethical code. An ethical code is almost a law — so if it is put into an ethical code, you can’t violate it, otherwise you face fines or other problems. I don’t know if it’s the same today — I think it’s a little more complicated.

Me and my colleagues from Russia were amazed by this. It’s an ideal situation. Unfortunately, now we face crisis. Crisis is ubiquitous. Media companies cut social benefits. Sometimes it’s against the law, but they do — they would like to survive. They cut the most expensive stuff, they cut the most expensive parts. I do remember that in the United States the most famous departments of investigation have been cut because of economic reasons and those famous, well known, glorious people could not find a proper job. It’s everywhere — in the United States, motherland of investigative journalism and all this stuff.

In every country it’s tough — especially when somebody violates ethics, is making a profit and there is a line of unemployed journalists to come and to work for nothing. I hope that we don’t forget our principles, because without principles it would be very problematic — even for immoral media. A small example: we in Russia have press councils, created on the model of British press councils, [but] it’s not as powerful.

In Russia, when big media associated with big governmental or oligarchical money are targeted by the press council, and it is announced that some chief editor or has violated some ethical principles, then they feel very unhappy. Even the most cynical person does not want to be shamed by his or her colleagues. It works. I think it’s important and we shouldn’t forget that those simple mechanisms — simple tools — are very efficient. We should respect ourselves and have more self-esteem in this way, I think.

Mary: You’re from Tomsk, aren’t you?

Nadezhda: I was born in Tomsk, but I haven’t lived there since my childhood.

Mary: OK, I was going to ask you about TV2 and more broadly, what’s happening to regional media in Russia?

Nadezhda: TV2 is our pride, and I was proud to know the founder. I used to be an active journalist and my first activities with the International Federation of Journalists began when, together with [TV2 founder] Arkady Mayofis, I visited the Seoul Global Conference on Journalism. You know, TV2 started several fantastic campaigns—[including] the ‘immortal regiment’, a commemoration devoted to relatives, people who were killed or were soldiers during the second world war. It was really independent and wonderful TV.

Last new year we invited a special gathering of people who hate each other, from the Russian media field to protect Russian independent regional TV channels. Our government then accepted and passed an amendment to advertisement law — without any consultation with the media and media owners. I think they wanted to close Dozhd (Rain) TV channel and TV2.

There were people from TV2, there were people from many regional companies, and we were lucky to gather the complaints, voices and open letters of many regional media outlets and broadcasting companies. We didn’t expect that we could achieve something serious, but anyway in two to three weeks—after this amendment was passed into law — they changed it. Again, without consultation. This means that the people’s opinion has some importance.

Unfortunately TV2 exists only on the internet — they have a very complicated situation. I know that our colleagues at the Mass Media Defence Centre are very active and won several cases at the European Court of Human Rights on this situation, but there’s also a very ugly business intrigue around it. The story of TV2 is a story of the glory and shame of regional Russian media. Anyway, they’re already a part of our history. But I do believe that TV2 will re-emerge, will be reset, sooner or later. Because people need it.

So what about regional media? Broadcasting is a disaster, because it’s very costly. Print media is more lucky. We have a number of very responsible, transparent, independent and innovative media sources like Altapress in Barnaul which is really successful and accepted by authorities. It’s been awarded the biggest governmental award for the best media management and is one the first commercial media companies in the Russian regions. Very active. Famous for its sharp investigations, famous for its free voice and good business model. It is, I should say, unique. But there are a dozen or two more very interesting print media companies.

We in the Russian Union of Journalists had a campaign — well a contest — where we selected the best newspapers from Russian regions. I think this could be a basis, to develop a new strategy for mid-career training and support of innovative and serious management. We need help with contacts, so this is why I am very happy to be discussing this idea with our European colleagues. With possible consulting by different experts — we already have a legal consultant in Russia who deals with the defence of mass media — we can create a campaign to build a professional community, to involve them much more.

I travel around the Russian regions a lot, and meet fantastic young people dedicated to their profession, to the mission of journalism. They are not interested in money — just in making money — but in something else. I think those people are our future. They are not connected with each other — it’s a bit of a puzzle picture. There should be a great effort to connect those grassroots — and not just grassroots, there are big media companies too, from Altapressto Irkutsk Vecherny. We need more people, more co-operation and more information. I am trying to establish as many contacts as possible for the future. So, I’m an optimist in general, despite all the problems with us today.

Mary: ‘Propaganda’ is a word that’s used a lot, and it’s used by both sides: by the Russian government to talk about opposition media and vice versa. How much of a problem do you think it is in a Russian context across politics?

Propaganda is not the worst problem we face. The problem is a lack of [people taking] active positions.

We had a discussion with our American colleagues about propaganda in the sophisticated New York Times, for example. Of course [its propaganda] is more sophisticated than propaganda on some Russian TV channel. But it’s there. I think it’s more important to talk about journalism as it is, and to talk about real standards and real values. Those who do propaganda could move after some time to, say, the propaganda of Mercedes-Benz, or of some perfume. It’s the same business. But it’s very difficult to mix the propaganda and journalism. They’re different professions.

What we try to explain to our young colleagues is that they can go into promotion — it’s very lucrative, well-respected business — but journalism is something different. My point is that propaganda is not the worst problem we face. It is not. The problem is a lack of active position of people. If they are active, it makes a difference. Propaganda just spoils the atmosphere.

Nadezhda: It is a question, and one not only for Russian journalists. Ideally journalists should not and must not have sympathies to activism, politics or have compassion to certain groups and so on and so forth. In practice it’s more complicated. We had very good journalists — some of whom passed away, died or were killed in unclear situations — who used to take part in politics in Russia. There was no doubt that they were honest journalists, but they took part in some activism because of our transitional period. I think that many journalists have their positions and many honest journalists try to be independent, because what is our ethical code other than an ideal? Try to be independent. Try not to play with facts, figures and so on.

What about activism? Well, many journalists are active, in protection of journalists’ rights — they hold events, they talk about it, they raise awareness and so on. On the other hand I know journalists who used to work as war correspondents, for example, and they helped people during and after the conflict. Anna Politkovskaya, Yuliya Kalinina, Viktoriya Ivleva — there were many. Many of them were women.

You know, together with UNESCO we held a conference in 2009 (Women Journalists, Building Bridges across Conflicts) and discussed this. It did something. It went against the classic rules, but it helped people and it enriched journalism as a place. It’s a problem of personal choice, and of course issues like that should be discussed and debated in a professional capacity.

Nadezhda: You know, I had a question when this survey — a general survey on the priorities of people — was presented. You should take into account at what moment the question was raised and in what manner and so on, because those polls are very tricky things. What I see and admire here — and I’m not a very frequent visitor to France, I love France, but it’s my first time here in Strasbourg — is the commitment of French people to their civil freedoms, which are not the basis of the state but of society. I think that’s very important. And I don’t think that French people would accept strong restrictions for media freedom. For any freedoms — and I think they are right.

People must develop the best in themselves

Of course, when we are talking about stuff like that it is important to understand that people are responsible for many things — not just the state, the people. After this, I thought a lot, because we [Russians] had many tragedies. Some people — not all people — began to look away from tragedy, from compassion, to play their own games, to attack people — and that’s not appropriate. I admire this idea of a 24-hour period of compassion, for our souls, to think — not to play games. I think the French people could manage.

I don’t think that strong restrictions are the only way to predict or to prevent or to combat terrorism and all these awful, horrible things. I think that the general efforts of all and the number of personal choices of all people including journalists would be more efficient, because people would become better inside. You know, terrorists try to develop the worst in people: fear, suspiciousness, hate. How much hate we have among people, on the internet, everywhere!

After that, fundamentalism [arose] as a result of the war on terror — there’s a whole library now written on the subject. But I think if people of good will, people of civil society organisations, NGOs, people from the media who accept that this is important for them could work in another direction, then that’s a real option. People must develop the best in themselves. And that’s the way.

Mary: Thank you very much for your time.