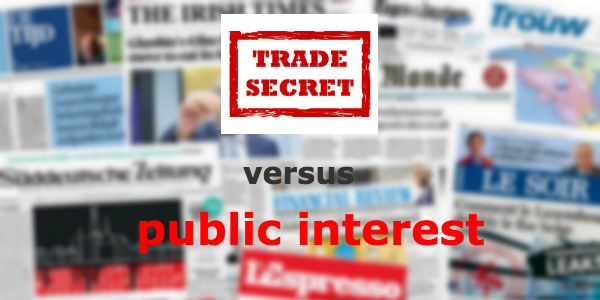 An agreement was reached on Tuesday 15 December between the European Parliament and the Council on the controversial draft Trade Secrets Directive. After intense debates, the final text improve the legal certainty as regards the exception for exercising the right to freedom of expression and information but journalists and media associations will remain vigilant.

The undersigned European journalists and media associations are happy to see that the initial wording requiring journalists to make “legitimate use of the right to freedom of expression…” has been rejected. Such a wording would have set a very dangerous precedent for media freedom in Europe. In these circumstances, they would have had to justify the exercise of their right, leading ultimately to self-censorship as soon as they are investigating industrial and corporate affairs.

Finally, the text also foresees an exception for whistleblowers providing that the Directive does not apply insofar as the trade secret was acquired, used or disclosed “for the purpose of revealing a misconduct, wrongdoing or illegal activity” and that the respondent revealed this information “for the purpose of protecting the general public interest”.

This version of the draft Directive has yet to be approved by the the Council of the EU. It should then be voted by the European Parliament in Spring 2016. EFJ, EMMA, ENPA, RSF and EBU will be paying close attention to how EU Member States transpose this European Directive in order to make sure it does not lead to further restrictions on media freedom.