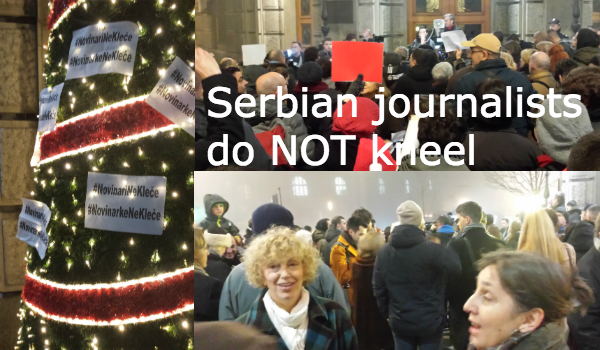 
Serbian journalists gathered on Monday evening (21/12/2015) in front of the Serbian government’s building to remind the Serbian prime minister Aleksandar Vucic about a promise he made 15 days ago. The prime minister made a public commitment to replace Bratislav Gasic, his minister of defense, due to the offensive statement made towards a female journalist. Mr Gasic sparked outrage after a journalist from B92 Television knelt down in front of him to avoid being in the way of cameras as he spoke to a group of reporters during a visit to a factory. The minister made the following offending comment: “I like these female journalists who kneel down so easily.”

Despite the announcement that he will be dismissed from his position, the Serbian minister of defense is still in office and doesn’t seem to be affected as he is was preparing his new year’s reception.

Protesters wrote symbolic messages on a Christmas tree in front of the government’s building stating “journalists do not kneel”.