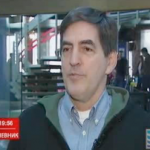 Born in the year of 1954 in Belgrade, Serbia

Employed at National public service / Radio-television of Serbia for 32 years, working as reporter, TV presenter, editor in chief for Satellite program, and after that Head of Entertainment program. Currently on a position as a chief editor for 5 channels on RTS Internet television.

I represented the Journalists Union of Serbia as delegate or observer in 4 Annual meetings of EFJ/IFJ : Bilbao, Zagreb, Verviers, and Montenegro.

In 2011. Journalists Union of Serbia successfully organized EFJ Annual Meeting in Belgrade ( together with UNS and NUNS )

Considering my 12-year experience in trade union work in Serbia, and active cooperation with journalists’ organizations in the neighboring countries, I firmly believe that , as a member of the EFJ Steering Committee I will represent the interests of journalists and media professionals  from Croatia, Montenegro, Macedonia, Bosnia and Herzegovina and other countries in the region with integrity, competence and dedication.

My own role working with Steering Committee I see in 3 levels:

REGIONAL LEVEL: To find new models and means for initiating social dialog in the region of Serbia, Croatia, Montenegro, Bosnia and Hercegovina, Albania). Previous unsuccessful attempts in bringing media regulations to the national level show that experience developed European countries is not applicable to the former Yugoslavian countries and wider region. It is not possible to provide negotiations in media world because media owners together with authorities in surrounding countries do not want that.

In order to avoid writing extensive studies, I stated my basic lines of action in the new Steering Committee. For additional question I am at your disposal at the Annual Meeting of the EFJ.